The Thorsby Rebels ended their regular season 8-2 Friday night after a 40-20 loss to the Horseshoe Bend Generals.

The Generals exploded in the first quarter with a 39-yard touchdown pass from Chase Cheaney to Kendall Thomas and a 65-yard trip to the end zone by Brandon Thomas.

But the Rebels were just as explosive, as Andrew Farris answered with a 26-yard touchdown pass to Nathan Oldroyd, and Marcus Bray intercepted a General pass in the end zone.

Farris then scored on a quarterback keeper from 47 yards out to tie the game at 13 apiece. 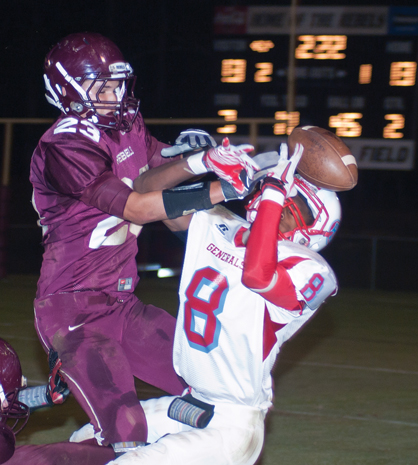 After two turnovers in Horseshoe Bend’s favor — the latter a fumbled punt recovery — the Generals’ Brandon Thomas scored again on a 28-yard run, making the score 19-13 at the half.

Neither team put up points in the third quarter, but the fourth would be the most eventful by far.

Farris connected with Bray for a 30-yard play to put the Rebels in scoring position. After a loss of yards, Farris found Bray in the end zone from 17 yards out. The call was controversial, but it was ruled a catch and Thorsby found themselves in the lead.

It was all Horseshoe Bend from there. Corey Battle ran the ball 35 yards, and the Generals recovered a fumble on the ensuing kickoff. This allowed Battle to take it in from the 15.

The next kickoff was déjà vu as the Generals recovered yet another Thorsby fumble, and Brandon Thomas took it all the way.

The Rebels tried one last time to reverse the momentum, but Horseshoe Bend’s Corey Pouncey intercepted a pass and nailed it down for the Generals.

After the game, Thorsby coach Billy Jackson reminded his players that next week they will enter the playoffs with home field advantage.

Next week the Rebels face Providence Christian in the first round of the playoffs.

Football preview: Devils not concerned about No. 1 ranking

“It’s not how you start; it’s how you finish.” The old cliché, while not always entirely true, describes local high... read more