Mustangs put up fight but fall 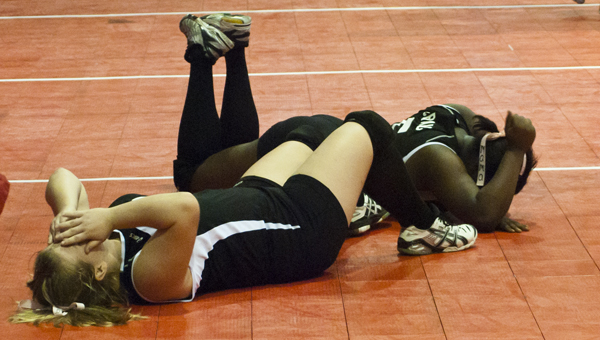 Down and out: Isabella volleyball players Kaylynn Culp, left, and Khadijah Craig react after the last point of their match Wednesday drops in, eliminating the Mustangs from the Elite 8 state tournament.

PELHAM – The result was the same as last year: Isabella falling in the first round of the Elite 8 state volleyball tournament.

But this appearance for IHS felt much different.

“I told them they better not ever go in that place with their heads down,” Graham said of his post-match speech. “We fought the whole way.”

Indeed they did, having a chance to win each set before fading late. The first set was tied as late as 15-15, the second set at 18 and the third set at 22.

From the start, Isabella seemed more comfortable than last year, which was the first state tournament appearance for most of the players that made a return trip this year.

The Mustangs returned serves well—something Graham said would be critical—and competed for balls around the net, and Pleasant Valley helped Isabella’s cause with numerous missed serves.

Senior Amber Wyatt twice blocked Pleasant Valley shots on a long, crucial rally in the final set that brought IHS to within one point of the lead, at 23-22.

But PVHS setter Ashley Bryant pushed the ball over the net past Isabella’s blockers but in front of the rest of the defense on the next point, and Isabella was sunk.