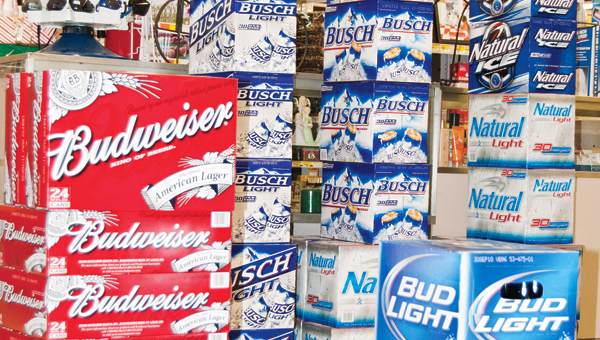 First shipment: Customers purchased alcoholic beverages for the first time in the town of Thorsby on Thursday.

The first alcoholic beverages were sold in the town of Thorsby on Thursday since a majority of the town’s voters voted to go wet in the June Primaries.

Mizzell’s Super Saver, one of two businesses in the town to apply for a license, sold its first product at about 9 a.m. Thursday.

About eight customers had visited the store to purchase alcoholic beverages as of 4:30 p.m., an employee reported.

Store Owner Chester Mizzell said the alcohol license costs about $1,000, but he believes it will boost his business.

“We should be able to recoup the cost between a month and a month and a half,” he said. “It will probably increase our business somewhere between 12 and 20 percent.”

Mizzell added that revenue will come from not only alcoholic beverages but also other items purchased by people who might otherwise do their shopping out of town.

Thorsby Mayor Dearl Hilyer estimates the town will bring in about $12,000 per year in revenue, or about $1,000 per month.

“For Thorsby, it’s something new and different. We’ll just have to see where it takes us from here.”

The other business in Thorsby to apply for a license was Main Street Market.

Thorsby is the third town in Chilton County to go wet and the second to go wet in less than a year.

A special election in Jemison made the city go wet back in January.