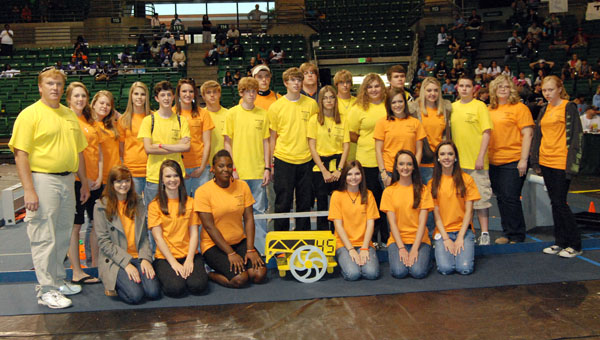 The Isabella robotics team, Mustang Engineering, is shown with instructor Jay LeCroy (far left) at the UAB Blazer BEST competition, where they placed sixth in the state.

In its second year in existence, the team was able to top some 6A schools, and the Mustangs’ robot was ranked fifth among those of participating schools.

Now they prepare for the regional South’s BEST competition at Auburn University on Nov. 18-20.

BEST is an acronym that stands for Boosting Engineering, Science and Technology.

“The Mustangs truly proved themselves the dark horse,” said Nelda LeCroy, team co-sponsor and wife of instructor Jay LeCroy. “Most amazing is the fact that a small 2A school with virtually no experience and no engineering class, only extracurricular volunteers, was able to do it.” 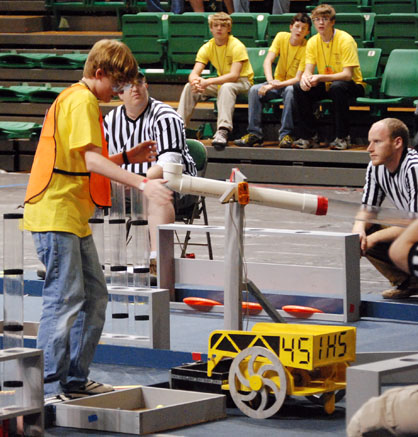 Isabella student Kyle Thrower helps to operate the school’s robot during competition at UAB on Oct. 9.

In about 40 days, students had to design a robot to perform specific tasks and have it built from certain materials provided. The robot was powered by four electric motors and made from materials such as plywood, PVC pipe and aluminum.

At UAB, the robot’s task was basically to retrieve and move golf balls. The golf balls represented products, and balls of a certain color represented defective products that had to be removed.

“We just pretended the bad golf balls were bad peaches. They had worms or they weren’t sweet enough,” LeCroy said.

The school subcontracted with Lewis Machine Company in Clanton and partnered with LeCroy Career/Tech Center.

“We had a partnership with LeCroy Career/Tech to help build what our kids designed,” said Jay LeCroy, giving credit to instructor Jason Sosa and Director Tommy Glasscock.

One of the biggest schools in the BEST competition, Hoover High School, also lent a helping hand to Isabella.

“Hoover was instrumental in teaching us how to teach these kids how to program this robot,” LeCroy said.

Mustang Engineering has come a long way since last year, when their robot wouldn’t even move. But perhaps even more important, they have helped put Isabella on the map at UAB.

“The dean of engineering came up to me and introduced herself, and handed me her card,” said student Heather Mason.

In preparation for South’s BEST, where they will compete among 60 schools, the team is evaluating its scores to make their robot better, stronger and faster. A state grant presented by Rep. Jimmy Martin will pay for the students to go on the trip.