Art runs in family for Cunningham 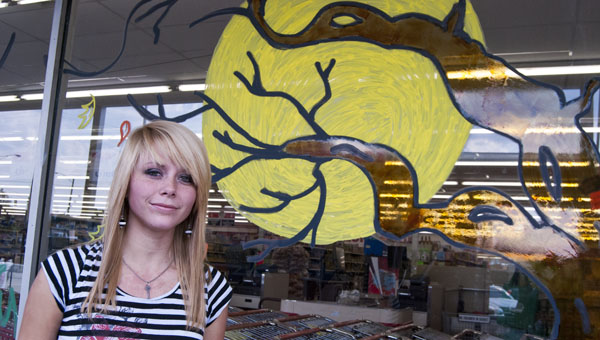 The fall scene that covers the front windows of Associated Foods in Clanton is a glimpse into the world of young artist Jessica Cunningham.

Cunningham, an employee of the store and a student at Jefferson State Community College, was asked to paint the mural after co-workers saw a picture of her nephew’s nursery adorned with her own renditions of Disney characters.

Cunningham credits her Uncle Jesse as an influence on her work.

“He just kind of inspired me,” said the 2010 Isabella High School graduate, who is taking art history at Jeff State.

She said she started with houses and animals but soon moved to her favorite subject, the human face. Many of her works are in the form of black and white sketches.

“People, to make them look real, is more of a challenge,” she said.

Cunningham’s storefront scene is the first work she has had viewed by the public. She aspires to have her work shown in galleries, such as Montevallo’s Stranded Art, where some of her uncle’s work hangs.

It was also the first time she had used window paint, which she found to be quite a challenge.

“It was very hard to work with,” she admitted.

While Cunningham would love to be a professional artist, her primary career goal is to become a pediatric nurse.

Cunningham hinted that she plans to go all out for a Christmas storefront scene.