Imagine having to swim out of a wrecked helicopter or rescue the victims of a plane crash. Now, imagine doing those things as a sixth-grader.

“We learned how to build a safe fire, about different types of fires, how to fuel them and how to put them out,” said Price.

“We learned not to put water on grease fires…we got to make these cool bracelets too,” added Downs, holding out his arm and explaining that the braided bracelets can support between 400 and 500 pounds. 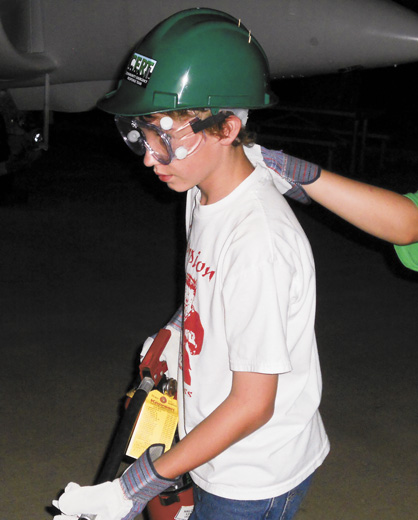 Jasper Sims of Jemison learns to use equipment and wears protective gear during the Be Ready Camp.

Be Ready Camp is a weeklong residential camp conducted in three sessions during National Preparedness Month every September. It is sponsored by multiple agencies at the local, state and national levels including the Governor’s

Office of Faith-Based and Community Initiatives, the Alabama Department of Homeland Security and the Alabama Emergency Management Agency.

Students apply during their fifth grade year, and approximately 100 students are selected statewide. As part of the application process, Price and Downs wrote essays on what it means to have a safe community.

“From what I understand, there is a lack of students going into fields of community service,” said county enrichment teacher Tammy Price. “At graduation, they said they wanted these students to go back to their communities and tell others what they had learned.”

Each day began at 6 a.m. and ended at 10 p.m. Students spent the first half of the day in classrooms, followed by hands-on demonstrations of each lesson.

The camp concluded with a mock disaster, in which the youth performed alongside professional responders. There were several actors playing injured victims, and the students had their own “injuries.”

“There was somebody with their eye popped out. It was cool,” Downs said.

The boys said they were divided up into teams with dinosaur names, such as Stegosaurus. This was done for a reason.

“The dinosaurs were not ready,” Price explained.

Upon graduating from Be Ready Camp, the students received a certificate from Gov. Bob Riley. 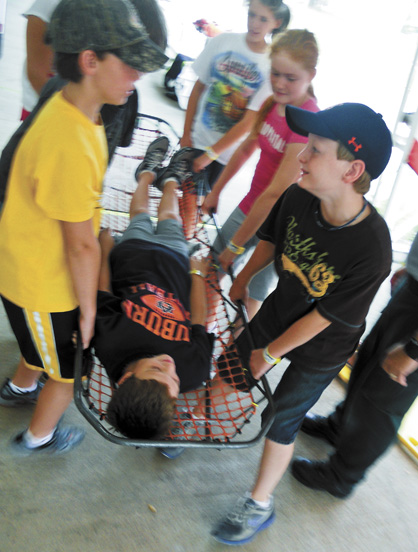 Bailey Price and Jadon Downs of Clanton help move a victim during the mock disaster drill.

Headley to take reigns of VHS