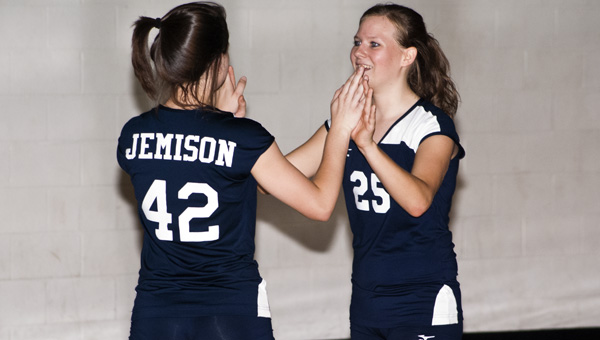 Thorsby was first to put points on the board, but Jemison caught up and was soon off to an early lead. The second set was tied 5-5 at one point, but the Lady Panthers never lost their momentum and secured another win.

“Right now, we have some people out of position because we’re hurt,” Jemison coach Leighsa Robinson said. “We’re having to really communicate on the floor and gel well.”

The Lady Panthers were 43 for 45 from the service line with Hallie Amos, Haley Smitherman and Morgan Posey all serving 100 percent. Tanya Liveoak was 5 for 6 with 1 ace.

Emily Smithey had 9 digs; Kasie Wells racked up 6 assists, 4 kills and 2 blocks; Denton Ellison made 4 kills; Kortney Robinson had 2 blocks and a kill; and Ashley Evans had 4 digs and 2 kills.

For Thorsby, Dawson was credited with 6 assists and Desiree Evans had 5 digs.

No place like home: Isa Bentley, left, and his Jemison teammates will be one of only two local teams playing... read more