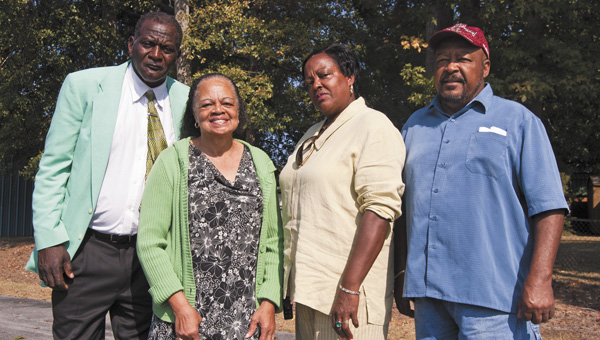 Speaking out: Those going on the trip include Robert Binion, Jessie Hudson, Lucy Binion and Jeff Varner

On the morning of Monday, Sept. 20, a bus will depart from E.M. Henry Skills Center in Clanton full of people who are looking for answers.

Black farmers from Selma, Uniontown and areas in Chilton County will be heading to Washington, D.C., led by Evangelist Robert Binion, to protest what they believe are discriminatory practices by the United States Department of Agriculture.

Binion, president of the National Black Farmers Association’s Southern Region, plans to meet with national leaders to let the farmers’ voices continue to be heard.

“I can walk through there just like I’m in Clanton,” Binion said Friday as he prepared to make the latest of many trips to the nation’s capital, expressing his familiarity with the streets and layout of the city.

On Tuesday, Sept. 21, members of the group will be leading praise and worship all day, Binion said. On Wednesday, directly across from USDA headquarters, he plans to meet with Lloyd Wright and Pearlie Reed of the USDA’s

Civil Rights Division. At 11:30, he will meet with Congressman Collin Peterson, member of the Agriculture Committee; and at 2 p.m. with U.S. Sen. Blanche Lincoln.

That evening at 7, Binion will speak to Howard University students about the rally scheduled for Thursday, dubbed the “High Noon Rally.”

Binion said he is seeking closure in three different areas — first, the settlement that promised $50,000 each to black farmers who claimed they were victims of racial discrimination; second, farmers who claim they were unjustifiably denied applications for loans; and third, those who were denied loans.

For those who may need a little more background, the issue dates back to the 1997 Pigford v. Glickman case against USDA, a class action lawsuit alleging racial discrimination in the distribution of farm loans and assistance to black farmers between 1983 and 1997. The case was settled 11 years ago with the U.S. government agreeing to pay qualified farmers specific amounts of compensation.

“It’s like being blackballed,” said Jessie Hudson, who will be taking the trip. Hudson said she was denied the privilege of a loan three times.

Jeff Varner, another local, received a loan from the USDA as a prevailing plaintiff, but he is still going on the trip because he believes in the cause.

“It’s just important to try to help some of the other farmers who didn’t get the money,” Varner said.

The bus will leave from Clanton at 8 a.m. Monday. Buses will be making their way from other states as well, including Arkansas, Kansas, Mississippi, Georgia and Texas.

“The wind is blowing gently on my back this time. I feel like I’m almost there,” Binion said.

No place like home: Isa Bentley, left, and his Jemison teammates will be one of only two local teams playing... read more