Couples have heart for farm animals 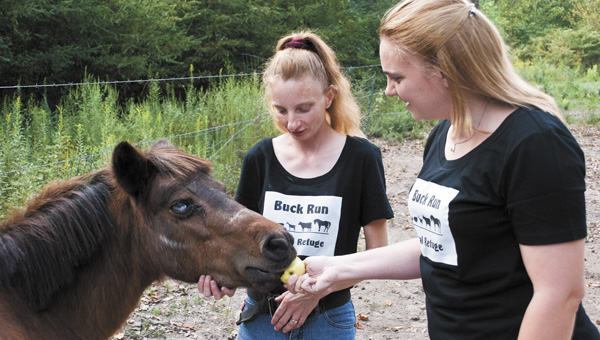 Eat it up: Shelly Byrne (right) and Toni Minot of Buck Run Animal Refuge feed an apple to Trixie, a rescued pony recently taken in by the organization.

Two Chilton County couples have started an animal refuge that focuses mainly on the rescue and care of farm animals.

Buck Run Animal Refuge, located off County Road 506 between Verbena and Marbury, is the brainchild of Toni Minot. She and her husband, Lyndon, along with business partner Shelly Byrne and husband, Sean, want to turn the property into a sanctuary for orphaned or unwanted animals.

Toni Minot, who grew up on a farm in Terre Haute, Ind., said the organization is her calling.
“There are too many animals around that people just don’t care about or are not able to care for,” she said.

Since May of this year, Buck Run has taken in two horses, six chickens, a female dog and several cats. They are no longer taking dogs and cats, however, as the focus is on farm animals.

Trixie, a female pony, was being kept in a 10-foot by 12-foot enclosure by her previous owners. She had a condition called “founder,” meaning she was getting too much protein and not enough exercise. Her hooves were overgrown and her mane and tail were matted.

“I love animals to death, and to see them in the shape I got her, it’s just heartbreaking,” Minot said.

Shelly Byrne didn’t grow up on a farm, but she has loved horses since grammar school. As a local Cub Scout leader, she hopes to get the Scouts and other groups of youth involved in community service projects at the refuge.

“We’re kind of new to this ourselves, but we have a heart for animals, and that’s what counts,” Sean Byrne said.

The group has printed out business cards and T-shirts and has started a Facebook page with pictures of rescued animals. They are keeping records of medication given to every animal, as well as vet checks and other forms of treatment. They plan to seek official nonprofit status.

The organization is looking for volunteers who are willing to donate time or materials to help clear land, build enclosures for animals and make the barn more hospitable during the winter.

One of the biggest needs is storage space, such as a utility building or trailer, Minot said.
“I’ve got sheep waiting on me, and I’ve got pigs waiting on me,” she said.
To volunteer or for more information, call 205-266-3092 or look for Buck Run Animal Refuge on Facebook.

Besides all the fun attendees have come to expect from the Chilton County Fair, the event also helps children in... read more