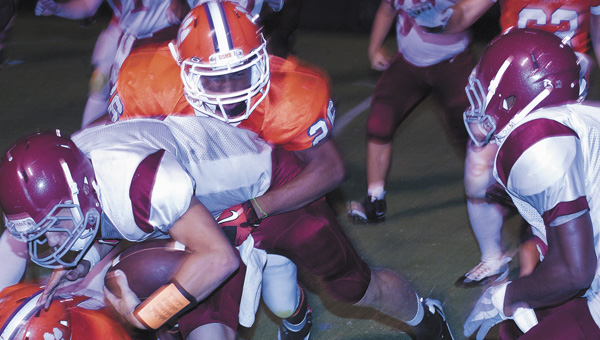 Chilton County senior Will Cooper makes a tackle against Brookwood on Friday.

The Chilton County Tigers won another battle of the cats Friday night, defeating the Brookwood Panthers, 28-10.

The first half was neck and neck. The Tigers’ Jacob McKinney scored a 4-yard touchdown in the first quarter, and the Panthers answered in the second as Anthony Herren connected with William Hill from 14 yards out.

During halftime, the Chilton County Alumni Band performed three numbers alongside current band members to the delight of the crowd. Former director Jim Swindle returned and was recognized on the field.

In the third quarter, the Tigers kept Brookwood away from the goal line but Tevin Davis kicked a field goal to put the Panthers up by 3.

The fourth quarter would be a different story, however, as the CCHS offense mounted an assault and never let up. It started with McKinney scoring a 22-yard TD, putting the Tigers back in the lead. Later, Joe Looney sprinted down the left side for a 59-yard touchdown run.

With just 1:49 remaining on the clock, Chris Felder tacked on 6 more points with a 17-yard play.

“I challenged the offense group at halftime, and they really responded by scoring three touchdowns in the second half to put away a big region win for us,” CCHS coach Brian Carter said.

After Friday night, the Tigers are 2-1 overall and 1-1 in region play.