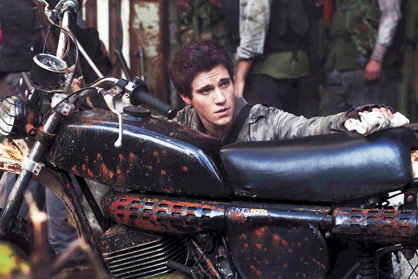 Roy is pictured on the set of the upcoming TNT series "Falling Skies."

Roy, a 2004 graduate of Chilton County High School, began his acting career that same year after meeting with an entertainment management company. He continues to make a name for himself both on TV and on the big screen.

Roy co-stars with Miley Cyrus on “Hannah Montana” as Hannah’s returning old flame on an episode called “Been Here All Along,” set to air Sunday night at 7 on Disney Channel East. The episode will include a special performance by Cyrus for military families.

Roy is currently in Toronto working on the Spielberg show, “Falling Skies,” which stars Moon Bloodgood and Noah Wyle. The science fiction drama — in which Roy’s character is Hal Mason — follows the story of a history teacher who leads the survivors of an alien invasion.

“We’re excited for him because he’s really worked so hard to get where he is,” said Roy’s mother, Pam Roy.

She said he came home last Christmas but has been extremely busy traveling around the country on different projects.

Other recent roles have included an episode of the Nickelodeon show iCarly called “iBeat the Heat;” a movie, “One Wish,” soon to be released to DVD; and the Disney movie, “Secretariat,” coming to theaters Oct. 8.
In “Secretariat,” based on the true story of a champion racehorse of the same name, Roy stars alongside Diane Lane and John Malkovich, among others.

Pam Roy said several people had been asking about Drew. She said that once she even prayed for him to come home but continues to support him.

“I guess God has special plans for everyone and we don’t always know what that plan is, but it’s worked well for him,” she said.

For more about Drew Roy, search for him on the International Movie Database online at imdb.com.