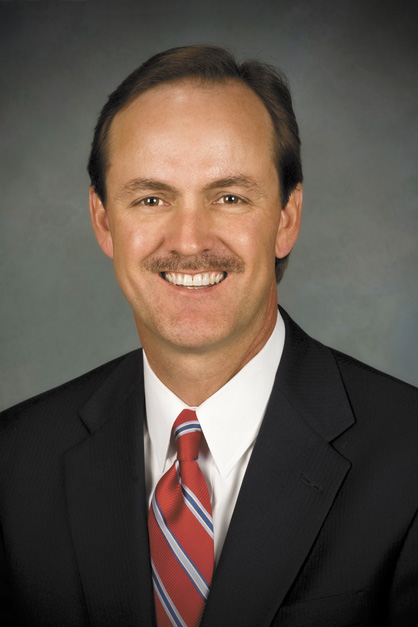 Who says you can’t grow up in small town Alabama and succeed? To Ed Day, Maplesville native who was recently named president and CEO of Mississippi Power, a rural upbringing instilled in him many of the characteristics to which he attributes his success.
Helping on his grandfather’s farm as a young boy and working with his hands led to a natural curiosity of how things work. This curiosity developed into a drive to succeed as Day got older.
“Growing up in a rural community, you tend to go out and do more things,” said Day, now 50. “You learn the attributes of working hard, accountability and relying on other people to help you. These are inherent traits when you grow up in a small community.”
People helping people is not so much a philosophy as it is a way of life. Without the teachers, coaches, principals and others who pushed him to strive for his goals, Day indicated, he wouldn’t be where he is today.
“When I was in high school, I was encouraged to take a lot of science and math courses,” he said. “My teachers always challenged me, and toward the end of my junior year they encouraged me to study engineering.”
George Walker, principal of Maplesville during Day’s years there from 1975-1978, was one name he couldn’t forget. It was Walker who encouraged him to further his engineering degrees, which made him highly employable by Southern Company upon graduation.
Walker also coached Day in junior high school; Day would go on to play multiple sports at Maplesville.
“That’s why we’re in the business, to help kids succeed,” Walker said. “I’m just so proud of him. I can’t say enough about him.”
Day joined Southern Company Services in 1983 as an engineer in the Hatch Nuclear Support Project. He progressed through positions of increasing responsibility before being named engineering group supervisor, Mechanical Design, in 1990. He was named assistant to the executive vice president, Engineering, in 1992. Four years later, he was named wholesale business development manager for Southern Wholesale Energy. In 1998, he was promoted to director, Business Development and to vice president, Business Development, in 2001. He assumed his role as executive vice president, Southern Company Generation, in May 2003.
His responsibilities at Southern Company Generation included engineering, procurement and construction of new generation (gas, coal gasification, biomass and nuclear construction oversight), environmental and retrofit projects across the Southern Company fleet of fossil and hydro generating plants and various technical support functions.
“I really just wanted to be the best engineer I could be,” Day said, adding that the experience of working in many different areas including Birmingham, Atlanta and South Georgia helped him become more confident in his leadership abilities.
Even at the high point of his career, he has not forgotten that it takes many people coming together to make something happen. He credited Southern Company for giving him the training and experience to keep moving forward.
“The people that you get to work with and be around is just a recipe for success,” Day said.
Day holds a bachelor’s degree in mechanical engineering from the University of Alabama and an MBA from Samford University. He is a 2004 graduate of the Advanced Management Program at Harvard University and currently serves on the Board of Directors of Junior Achievement of Central Alabama and United Way of Central Alabama.
On Aug. 13, he became Mississippi Power’s 11th president in the company’s 85-year history. His immediate goals are to focus on customer satisfaction, keep rates as low as possible, and maintain reliable service.
But even as CEO of a company that serves 23 counties, Day says the thing that keeps him grounded is staying in touch with his friends and family in Maplesville. He called it a “huge key” to how he communicates today.
“I still rely on the same characteristics I was taught as a young boy growing up in rural Chilton County,” Day said.
Day’s extended family lives in Maplesville, including a sister, Pam Ousley, who teaches there.
He and his wife, Laurie, have three children, Sarah, Olivia and Edward Day VII.

By Stephen Dawkins The Jemison City Council on Monday was updated on a couple of road improvement projects. Mayor Eddie... read more