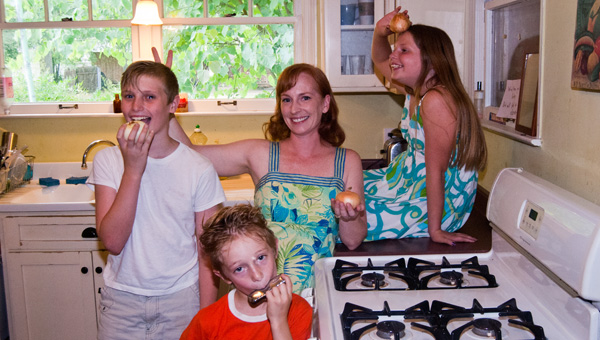 Sarah Jackson and her children (clockwise from center) Quinn, Aidan, and Gannon entered a national jingle contest for the vidalia onion on a whim.

Family music sensations are nothing new. From the BeeGees to the Osmonds to even Johnny and Rosanne Cash, it seems that musical talent is almost directly related to genetics.

Add to that Clanton’s own the Jacksons, a wild rock group that includes a Mohawk-clad harmonica player, a whole ton of onions, and just one person over the age of 13.

Clanton resident Sarah Jackson and her three children- son, Aidan (12); daughter, Gannon (10); and son, Quinn (7) – have entered a national jingle contest put on by the Vidalia Onion Committee after getting inspiration from a book they all read.

“I had just finished reading a book called The Prize Winner of Definance, Ohio about a mother who supports her children by entering jingle contests,” she said. “We loved the idea and started looking for contests to enter. This one was the first we saw.”

From there, the Jacksons sat down and composed a song for the contest. The creative duties were assigned to have mom handling the music and the kids handling the lyrics.

“I came up with the tune on a lark,” Jackson said. “The kids wrote the song. It took about 45 minutes. My daughter said that ‘regalia’ rhymed with ‘Vidalia’ and made sure we added that.”

Once the song was recorded, the next logical step was to make a music video, per contest rules. The video was shot inside their neighbor’s kitchen and starred the Jacksons, along with several Vidalias.

The video was then uploaded on the committee’s webpage. The video is placed with others submitted from around the country, and viewers are asked to vote on which video they like the most. The video with the most votes by the end of July wins a $1,000 Visa gift card. A panel of judges will select the grand prize winner, which includes having the jingle recorded by a country music star and used for the Vidalia onion national campaign.

Win or lose, Jackson said she and the children have had a good time with the whole process. She also said they would look for other jingle competitions in the future.

“We have had so much fun, we’d do it again,” she said. “It was 150 percent pure fun. The kids check the video every day to see how many votes they have.”

At press time, the Jacksons’ video was fourth out of 14 videos. For more information or to watch the video, visit www.contest.vidaliaonion.org.

Event to focus on helping residents land a job