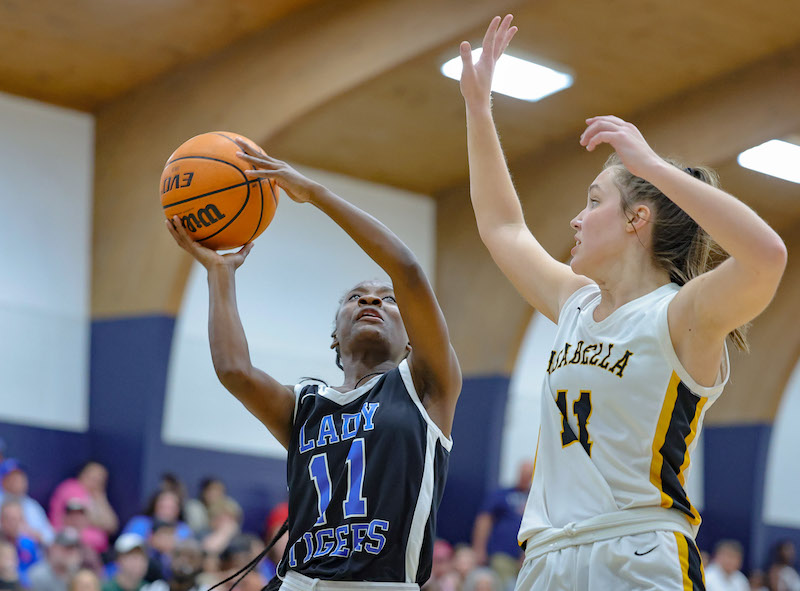 On Jan. 19, CCHS took down Benjamin Russell High School 65-33 on the road. Ivyonna Varner posted a season-high 30 points for the Tigers and knocked down seven 3-pointers. She added seven steals to her totals. Anderson had her second consecutive triple-double with 16 points, 14 assists and 11 rebounds.

“Defense has been the thing we have been working on the most throughout the season,” Isabella coach Jared Day said. “Some good defense will get you a long way, and we are playing really well right now.”

The Mustangs lost 56-51 on Jan. 17 to Holtville High School, their only loss of the week.

“We have been trying to feature Eli (Kendrick), DreVon (Lee) and Zac (Chapman) into our offensive sets when we can,” Isabella varsity boy’s coach Tate Leonard said. “We need our whole team to pick it up on defense.”

The Tigers traveled to Benjamin Russell on Jan. 19 and lost a close one 65-63. Worthy led the way again with 15 points and six rebounds. Bolding had 15 points and five rebounds and Dermarrion Caffey had 11 points.

The Panthers lost to Holy Family Catholic School 64-61 on Jan. 23 to end their week, but played Holy Family better the second time after losing 86-56 on Nov. 17 to them.

The Panthers exploded against Holy Family Catholic on Jan. 23 and won 79-12 with some stifling defense. Jaclyn Lowery led Jemison in scoring with 28 points followed by Zariyah Johnson with 22 points.

Fellow northern Chilton County school Thorsby saw its varsity girl’s team pick up two wins during last week’s action. The Rebels took down Central of Coosa County 65-33 on Jan. 17 in AHSAA Class 2A Area 7 play. They also picked up an in-county win over Maplesville High School on Jan. 19 sprinting to a 53-27 win. The Rebels’ luck ran out on Jan. 20 in the area loss to Isabella.

Thorsby’s varsity boy’s team is trying to get back on track after an 0-3 week between Jan. 17-23. Central of Coosa County got the best of the Rebels 68-35, then Maplesville took down Thorsby 36-31. Isabella was able to outlast Thorsby in their win on Jan. 20.

Both of Maplesville’s varsity basketball teams picked up area wins last week. The varsity boy’s team defeated Billingsley High School 52-49 and were led by Jakavion Jackson with 20 points. Aidan Abbott and Kristopher Groom added 10 points each. The Red Devils’ other win came on Jan. 19 against Thorsby.

Maplesville dropped its Jan. 17 matchup with Notasulga High School 57-33 where Jakobe Nix had 11 points, and lost its Jan. 21 game against Jasper High School where Jackson tallied 14 points. The Red Devils ended their week with a close 64-57 loss to Holtville that saw Jackson post his second 20-point game of the week with 21 points. Groom added 14 points in the game.

Maplesville’s varsity girl’s team won its Jan. 20 matchup over Billingsley 40-34. The Red Devils were able to get the win after losing its first two games last week — 31-24 on Jan. 17 to Notasulga and to Thorsby on Jan. 19.

“Having poise, taking good shots and having more confidence in ourselves,” were some of things after the loss to Thorsby Maplesville varsity girl’s coach Eric Bailey wanted to see them improve 24 hours later against Billingsley. The Red Devils responded.

“We are young, and that comes with time and it is just something we have to build on,” Bailey said.

Billingsley’s varsity boy’s team went 0-3 last week and combined the Jan. 20 loss to Maplesville with a 63-17 loss to Loachapoka High School on Jan. 18 and a 73-39 loss to Notasulga on Jan. 19. Hudson Manning led the Bears in scoring against Loachapoka with seven points, and Landon Jones led the way against Notasulga with nine points. The best performance for the Bears was Eli Manning posting 24 points against Maplesville.

Billingsley’s varsity girl’s team picked up their second AHSAA Class 1A Area 7 win of the season, taking down Notasulga 31-22 on Jan. 19. Alana Jones had 12 points to lead the way for the Bears. However, a 65-7 loss to Loachapoka on Jan. 18 and a 40-34 loss to Maplesville on Jan. 20 also greeted Billingsley last week. Jones had 12 points against Maplesville and Megan Chandler had 10 points the same game.

The Bears fared better against Loachapoka in their second matchup of the week on Jan. 23, but still lost 47-14.

The Red Devils’ varsity girl’s team lost both of its games against Loachapoka on Jan. 17 and 20 as well.