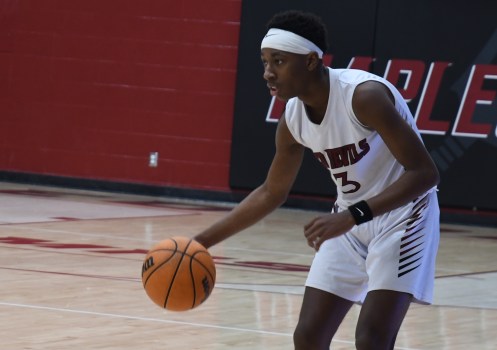 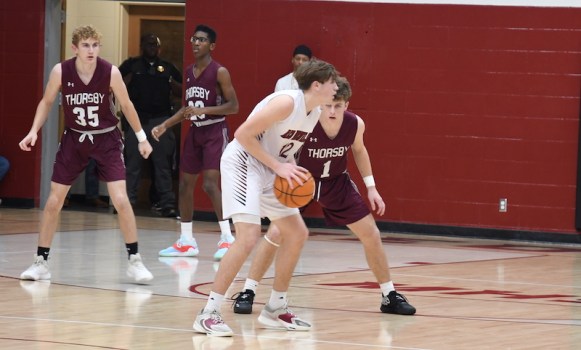 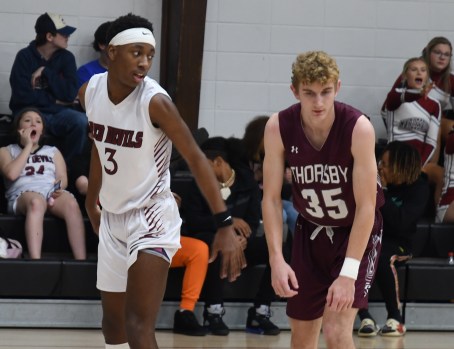 “They turned it on last night. They are getting a better understanding of what shots to give up … The bench gave them energy, too.” Maplesville coach Undra Rush said. “When you are building a program, you have to start with the easy stuff, which is defense and effort, and we will build on the offense later on.”

Both teams struggled shooting from the floor in the first quarter with just six points scored between the two. Scoring picked up in the second quarter, and Thorsby’s Braxton Price put in a layup with two minutes before halftime to put Thorsby up 13-12.

Troy McMillan answered with a 3-pointer for Maplesville, and Aiden Seeley tied it up at 15 the next Thorsby possession with a layup. McMillan had eight points, and Seeley had seven points.

With a few seconds before halftime, Aidan Abbott launched a 40-foot jumper for Maplesville and connected to send the Red Devils into the break up 19-15. Abbott had eight points for Maplesville.

Rush said he was really happy with the energy boost his bench gave the Red Devils when they came on the floor.

“They love the job, and they are excited about it,” Rush said. “That is the kind of stuff we want, and everyone has a job to do.”

The second half started slow, much like the first half did, but the game remained close. Maplesville maintained its lead throughout the third quarter, and Kristopher Groom put in a free throw at the end of the quarter to reestablish the four-point lead at 26-22.

Groom got involved again in the Maplesville offense in the fourth quarter with a layup after a pocket pass from Jakavion Jackson. Groom’s layup put the Red Devils up 32-24 with six minutes left, their largest lead of the game.

Rush does not normally call set plays for Maplesville on offense. Instead, Rush allows his players to pick their spots on offense and trust their decision-making.

“I try to teach our kids situational stuff and taking what the defense gives us and just playing basketball,” Rush said. “It is about decision making on offense … We are going to try to touch the paint. If they collapse, we are going to kick (the ball) out, and if they close out too quick, we are going to drive past them.”

“I am starting to learn my guys and what they can and cannot do, and they are starting to do the same thing with themselves,” Rush said.

Maplesville hops back into AHSAA Class 1A Area 7 play their next game hosting Billingsley High School on Jan. 20 at 6:30 p.m. Thorsby faces off with in-county and AHSAA Class 2A Area 7 rival Isabella High School on the same day at 7 p.m. at home.