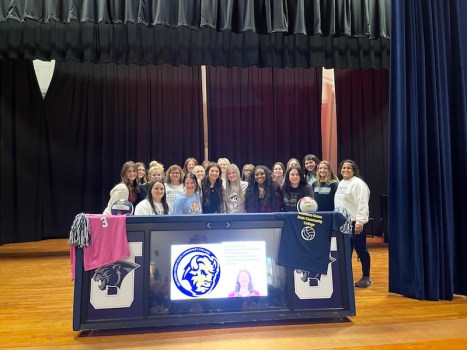 The moment Jaclyn Lowery signed her name to her letter of intent. (CAREY REEDER | ADVERTISER) 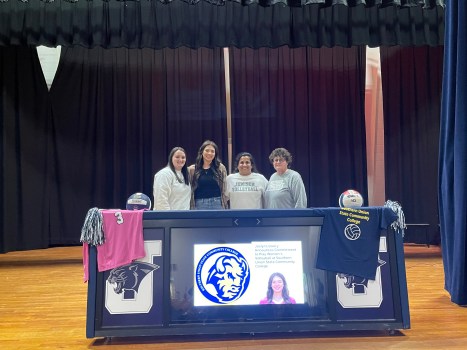 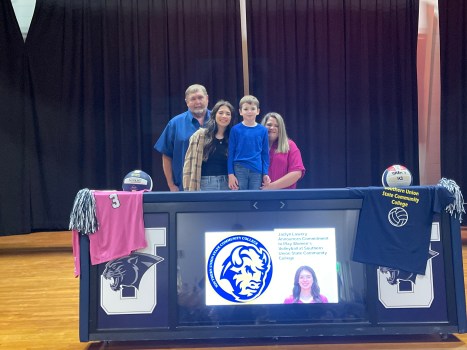 Jaclyn Lowery with her family after signing her letter of intent to play college volleyball. (CAREY REEDER | ADVERTISER)

Every high school athlete strives to be the best versions of themselves as possible on the field of competition. Jemison High School’s Jaclyn Lowery took that to another level and parlayed that drive into signing a letter of intent to play college volleyball at Southern Union State Community College.

Lowery signed her letter of intent on Jan. 19 in the JHS auditorium in front of friends, family and coaches. Lowery’s accolades while at Jemison includes the 2021 The Clanton Advertiser Player of the Year and a multi-time Advertiser all-county team honoree. She is also a multi-time all-county tournament performer. Lowery has been on the Panthers varsity volleyball team since her sophomore year.

“I enjoyed (my time at Jemison) a lot,” Lowery said.

“She is also one of the hardest workers,” Kelsey Mims, Jemison assistant volleyball coach, said. “She will come in, push herself … She is always wanting to get better and do the little things to get better. She is very driven, and I think that will carry her well into her college career.”

Mims is also a coach for the Jemison softball and girl’s basketball teams that Lowery played on throughout high school.

Lowery’s work ethic is what Mims pinpointed as the trait that will serve her best at the college level. Lowery is known to watch film away from practice unprompted to find ways where she can improve.

Lowery talked to a few colleges during her recruitment, but Southern Union stood out to her when she visited the campus.

“When I got there, I instantly knew this was the place for me, and I really liked it,” Lowery said. “I knew I wanted to go there. The facilities were nice and the gym was pretty big … Everything is spaced out and not too crammed together, I liked that.”

Lowery said Jemison head volleyball coach Melissa Baswell always told the team to “do better,” and the team even had shirts made with the saying on it. The simple message was directed that the team can always do better and improve their game. Lowery said that lesson is something she “can carry into college volleyball.”

“Every coach has a different style they coach with, and I am definitely open to new coaching tips to always improve my game,” Lowery said. “I just want to be the best player I can be.”

Lowery recalled the beach trips Jemison’s volleyball team took her junior and senior years as the most fun she had while at JHS. The Panthers team also traveled to Disney World last season as well which Lowery enjoyed.

Baswell and Mims had countless stories about Lowery’s fun personality that showed during her time at Jemison.

“She would always say something, and then do this kiddy laugh and run away,” Baswell said.

“She is definitely a kid at heart,” Mims said.

Lowery will graduate from Jemison in a few months and then jump straight into training prior to the preseason at Southern Union. Baswell said the time is now for Lowery to push hard throughout the summer until the preseason starts to set herself up well for her freshman year there.

“Her drive to want to get better is what is going to get her to that next level,” Baswell said. “She needs to continue to make herself standout, and in college you need to make sure you continue to go out there and stand out.”

Lowery will play at Southern Union for two seasons and then look to transfer to a four-year school to complete her college volleyball career.