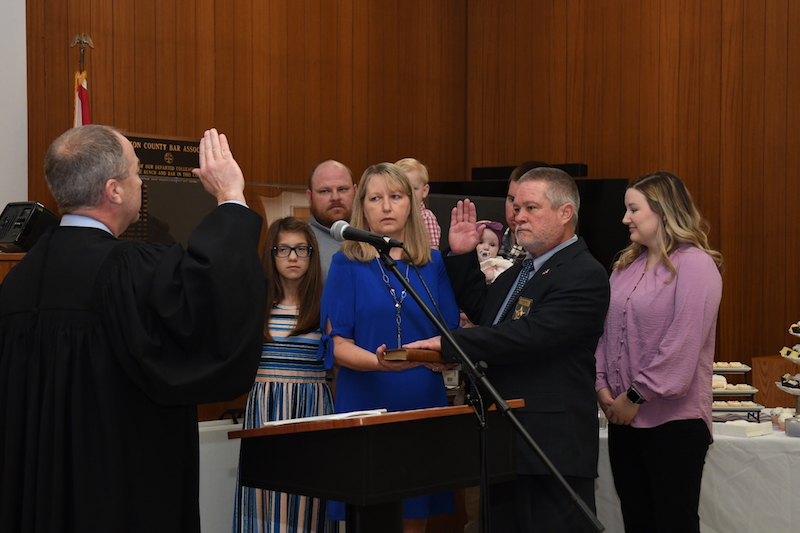 Chilton County Sheriff John Shearon became only the second sheriff in Chilton County history to be sworn in for a third term on Jan. 17.

During the ceremony, a few friends and colleagues spoke about working with the sheriff. A reoccurring theme was his dedication to the community, his willingness to help out and his example of how to be a Christian leader.

Probate Judge Jason Calhoun and Circuit Court Clerk Glenn McGriff thanked the sheriff and his department for working well with their departments. Calhoun said there are several things in his office that require help from the Sheriff’s Office to get done.

“We have a very good working relationship,” Calhoun said, commenting that the Sheriff’s Office “has gone above and beyond.”

McGriff thanked the deputies and other emergency response personnel present for all they do for the county.

“(Shearon) is a good Christian man,” McGriff said, talking about his willingness to go pray with families that were going through a rough time.

McGriff and Trae Caton talked about how Shearon is still a hands-on person. He responds to calls and is on site with a chain saw to help clear rounds and areas when natural disasters strike, here and in neighboring counties.

“We can’t get him to sit in the command post like he is supposed to and run the show,” Caton said. “He would rather be out there on the ground, rather than making one of us do that.”

He encouraged those present to pray for the sheriff and deputies.

Shearon said the position is about serving the community.

He spoke about the dedication of his deputies.

“You will never find a more dedicated bunch … They handle business, and they do it with pride and dignity,” Shearon said.

He said the department also works well with other local law enforcement.

“We got a good bunch of law enforcement in here in Chilton County that I would put up against anybody,” Shearon said.

Shearon also spoke about the support of his family to make what he does possible.

“The hardest thing I have ever done in my life is be an elected official,” Shearon said.

Caton recounted watching Shearon work on an emergency call, when Caton was 16 or 17 and a volunteer firefighter responding to the scene.

“It was kind of a distant admiration of Mr. John,” Caton said. “… Watching him how he handled that scene, how he conducted the business of it is something that stuck with me, even in the roles that I hold.”

Later, Caton get to know Shearon better personally and professionally. Caton commented that Shearon “taught me what it was to be a man, I felt like.” He thanked Shearon for teaching him how to serve others and how to be humble.

Caton also highlighted how Shearon is financially conscience about the department’s budget.

Pastor Andy Mims of Mulberry Baptist Church, a chaplain with the Sheriff’s Office, said Shearon leads by example and has the support of his deputies and staff. Mims said Shearon fits the description in Romans 12:9-21 where it describes how those who love God should act.