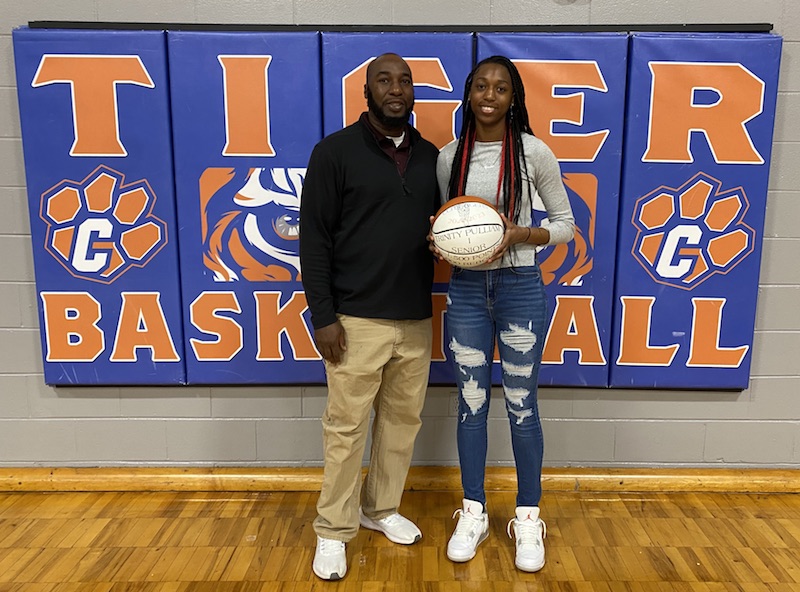 Trinity Pulliam, right, with her father and coach Rickey Pulliam after she surpassed 1,500 career points and 2,000 career rebounds on Jan. 13. (CAREY REEDER | ADVERTISER)

In modern day basketball, dominant back-to-the-basket post players are few and far between. However, Chilton County High School senior Trinity Pulliam is disproving that myth and has surpassed another milestone in her high school basketball career.

She achieved 1,500 career points and 2,000 career rebounds in the Tigers 57-39 win over Benjamin Russell High School on Jan. 13. After countless high school basketball games, Trinity Pulliam was able to surpass both numbers in the same game.

“It was big for her,” Rickey Pulliam, CCHS coach and Trinity’s father, said. “I did not know she was close until our statistician Walter (Postell) told me she was two points and one rebound away, so she really got it before we recognized her.”

Trinity has been a varsity player since her seventh-grade year, and Rickey Pulliam said her ability to be a team leader is what has grown her into the dominant player she is for CCHS this year. The 2022-2023 basketball season is the Pulliam’s first year at Chilton County.

“I still have more to achieve and more to improve on, and I know that this is just a step to getting to where I want to go,” Trinity Pulliam said. “I am glad I am at (CCHS) because I feel like I can help everyone for next year, and everyone here is helping me improve on some things.”

Trinity has picked up skills over the years that she has implemented into her game to help round her into a more all-around player. Rickey Pulliam said he attributes that to Trinity’s work ethic.

“When someone tries to take something away from her, she tries to improve on the other parts of her game on her own,” Rickey Pulliam said. “She is in the gym, she is working on trying to improve and that has been her way all the way through (high school). She has had to learn different things from being a seventh grader to an 11th grader.”

Trinity Pulliam said she has some things she wants to continue to improve on to take her game to the next level. Reverse layups down in the paint, and her three-point shooting are two of the biggest points of emphasis for her when it comes to finding ways to keep improving.

“I wanted to work on my three-point shooting last year, but we were running a different style of offense, but here I can play all around, so if I get a chance to shoot I am taking it,” Trinity Pulliam said.

Trinity is on the brink of another milestone as well on the defensive end of the floor. After the Benjamin Russell game on Jan. 13, Trinity had 229 blocks through 24 games this season. That is just 38 blocks behind the Alabama state record for blocks in a season at 267. Trinity Pulliam has six regular season games, and the postseason, after the Jan. 13 matchup to get to that mark.

“Her ceiling is high, and I think we limit her with some of our style in post, but she can handle the ball on the outside as well,” Rickey Pulliam said. “I just think the things she brings to the table from being an inside-outside player … It is hard for someone to defend her, and she is also a coach on the floor.”

Trinity Pulliam helped CCHS go 2-0 in AHSAA Class 6A Area 5 play so far this season with a 67-53 win over Calera High School on Jan. 17. The Tigers are 17-8 overall this season.