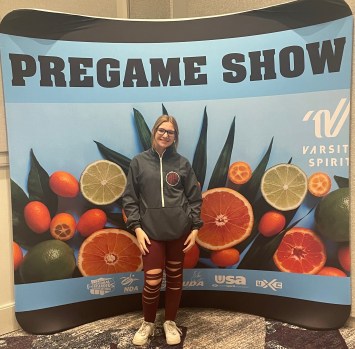 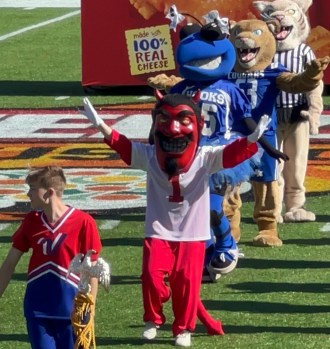 Emma Merritt, better known to sports fans as Maplesville High School mascot Blaze, has been named an All-American Mascot and recently performed with other All-Americans in the Varsity Spirit Citrus Bowl Pregame Show in Orlando.

While attending Auburn UCA Camp last summer, “My mascot coach wanted me to try out for All-American,” Merritt said. “It is something that both cheerleaders and mascots can try out for. For mascots, we have to make … a skit or a dance.”

Merritt created her routine and then performed at the camp to see if her score would rank her as an All-American Mascot.

“It was very, very uplifting,” the 10th grade MHS student said. “All of the people there were nice … I feel like the instructors definitely helped us learn a lot. I definitely feel like I came back and knew a lot more than I did before.”

She said the instructors “showed me how to definitely be like more focused on the crowd and interact more with the crowd.”

Each of the mascots were able to take pictures in the stadium before the performance.

Mascots practiced for two days at the event in preparation for the pregame show routine that they performed with the cheerleaders.

“I was in the very front, in the very middle,” Merritt said. “I felt like it was a really cool experience to be in front, and just seeing how energetic everybody was and how welcoming everybody was definitely made the trip a lot better.”

Merritt interacted with fans at the game, which was the LSU Tigers and the Purdue Boilermakers, and met some of the LSU band members and football players.

Her favorite part of the performance was when the mascots formed a tunnel for the others to walk through and do an individual dance. Merritt paired up with another mascot to do a special handshake for her dance.

“It was really fun to do,” Merritt said.

Merritt first became interested in being the MHS mascot when she was asked to fill in for a couple of games during football season last school year.

“I liked it a lot more than I thought I would,” Merritt said. “So this year, I tried out and that’s what started it. It is definitely something I think a lot more people would enjoy if they just tried it.”

Merritt plans on trying out to continue being Blaze each year for the rest of her high school career.

At Auburn UCA, the instructors talk about the college mascot experience. This is something Merritt said she “could picture myself doing.”

As a part of the trip, Merritt was able to go to the Universal Studios theme park with three of the other participants that she had developed a friendship with.