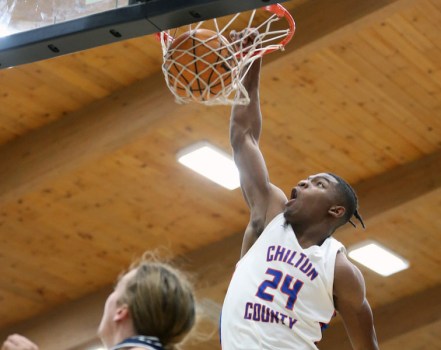 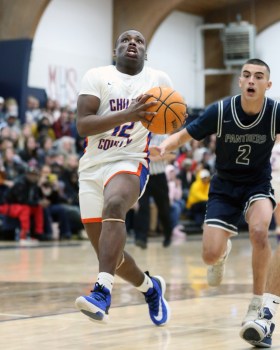 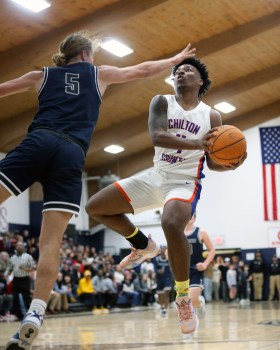 Jakobe Worthy floats into the lane for a shot for CCHS. (KAILEY SUMRALL | SPECIAL)

Chilton County High School punched its ticket to the varsity boy’s 2023 Chilton County Basketball Tournament with a 72-32 win over Jemison High School on Jan. 5 in the semifinals. The No. 1 seeded Tigers were led by Latavion Floyd with 18 points and eight rebounds to lead CCHS to the win over the Panthers home floor.

Jakobe Worthy and Floyd were both back in the CCHS lineup against Jemison after being unavailable for a few games. The matchup was the second meeting between the two biggest high schools in Chilton County this year. CCHS won 54-19 on Dec. 2 on their home floor.

Worthy made his return to the tune of 14 points and seven assists.

“We played well with just about everyone back in our lineup, and we started out the game really well and played with good energy and intensity,” CCHS coach Austin Moncus said. “It really was a team effort … everyone played significant minutes, everyone played well and did what we asked them to do. For them to do that in an environment like that … it was loud and crowded, but our guys showed up and showed out.”

CCHS jumped out to a massive lead quickly going up 17-0 halfway through the first quarter. The Tigers managed that gap throughout the opening quarter to hold a 22-5 lead after one quarter. Demarcus Riddick was a force in the opening quarter throwing down multiple dunks and giving CCHS an early spark. Riddick finished with 16 points, nine rebounds and three blocks.

“Some of the things he does on a basketball court are unreal,” Moncus said. “He is a freak, and he does everything the right way … he is there for his team.”

The Tigers extended their lead in the second quarter to hold a 20-point advantage at the intermission, 39-19. Moncus was able to get more rotation players minutes in the second half, and they helped bloom the lead to 57-28 after three quarters and cruise to the win.

“We are going to be playing really good teams in the next few weeks in region play, so it is good to see a team like (CCHS),” Jemison coach Christian Goodwin said. “They put so much pressure on the ball and we needed to see that. It was a good learning moment for us … to get exposed in some areas like we did is good for the long-term picture.”

Moncus will have more reinforcements in the tournament final on Jan. 7 as senior Jakeveon Bolding is expected to get a few minutes on the floor for the Tigers in his first action of the season. Bolding is recovering from injury and has not played yet this season.

“The doctor cleared him and he is still in the rehab stages, but we are going to slowly start sprinkling him in and getting him back into game shape,” Moncus said. “You have to be playing well at the right time, and hopefully, we are getting all of our pieces back at the right time too.”

The Tigers await the winner of the other semifinal on Jan. 6 between Maplesville High School and Thorsby High School. The game is at 7 p.m. at Jemison High School.