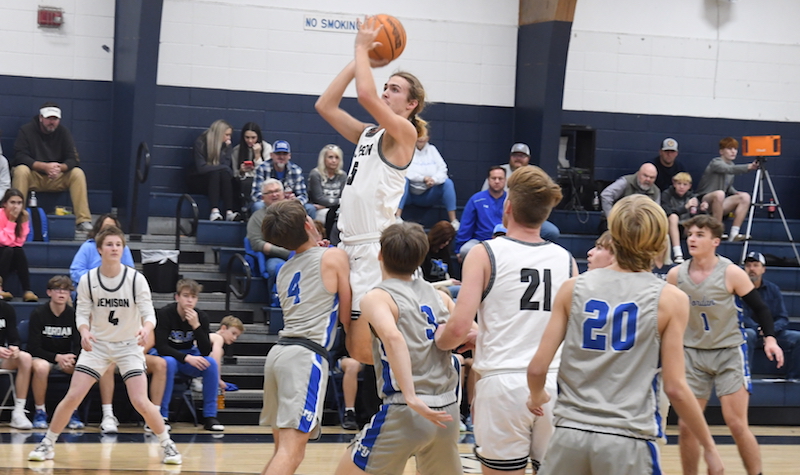 Jemison High School prevailed 59-57 over Isabella High School in the first round of the varsity boy’s 2023 Chilton County Basketball Tournament on Jan. 2. Jayden Managan led the Panthers in scoring with 18 points and Tucker Bean pitched in 17 points to lead the No. 4 seeded Panthers to a semifinal matchup with the No. 1 seed Chilton County High School.

The Panthers jumped out to a quick 22-8 lead on Isabella after a strong first quarter. The Mustangs, however, were able to weather the storm in the second quarter and cut the lead to 10 points going into halftime.

“It was a little too close for comfort, and it should’ve been avoidable, but like I told the guys, ‘It is better to win ugly than lose pretty,’” Jemison coach Christian Goodwin said.

Jemison got back on track coming out of halftime and the lead bloomed to 16 points in the third quarter.

Then, the Mustangs took all the momentum and began their comeback.

“I hate to lose, but I was really proud of how our guys fought,” Isabella coach Tate Leonard said. “This was the third time we have played Jemison, and we have improved each time and had a chance to win last night.”

Eli Kendrick was the game’s highest scorer with 24 points, and Zac Chapman had 17 points for the Mustangs. Garrett Price had nine points.

The Mustangs hit some tough shots to cut the deficit to single digits entering the fourth quarter. The comeback bid culminated with four minutes left after Isabella took a one-point lead.

Goodwin said the initial reaction to giving up the lead after being up so much is to panic. He took a timeout immediately after Isabella took the lead and reiterated that simple message over and over again.

“You cannot let a team like that get confidence, and let them claw back into a game like that,” Goodwin said. “The momentum shifted … but we figured out a way even when it felt like everything was going against us, and we did not hold up our end.”

Jemison was able to withstand the pressure by Isabella and pull out the two-point win.

On the first night of the 2023 Chilton County Basketball Tournaments, Goodwin said the environment in the Panthers home gymnasium was good, and expects it to ramp up the further it gets into it.

“The atmosphere was good, and if you were someone who just likes close basketball games it would have been enjoyable to watch (last night),” Goodwin said. “It was loud, and a lot of people were there.”