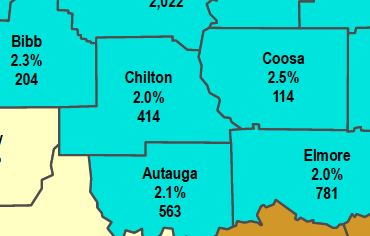 Unemployment remains low in Chilton County with the November rate being reported at 2%.

Unemployment remains low in Chilton County with the November rate being reported at 2%.

This is down slightly from 2.2% in October.

The Alabama Department of Labor reported the civilian workforce decreased by 258 people over the previous month to 20,350. Tara Hutchison with the department said this was likely because of a drop in agricultural employment. However, the reported civilian workforce is still higher than it was in November 2021 when it was 20,109.

At the state level, the seasonally adjusted unemployment rate for November was the same as October at 2.7%.

“It is encouraging to see that Alabama’s economy is supporting more jobs today than ever in our 203-year history,” Gov. Kay Ivey said. “While we continue maintaining a low unemployment rate, the fact that our businesses are growing jobs is certainly something to be grateful for this holiday season. We will continue working hard to support Alabamians as we weather a challenging national climate.”

There were 2,119,800 people employed in the state in November. Job growth was mostly in transportation, utility, government and professional services industries. However, employment in the fields of education and health services also remains at “record high levels of employment,” according to a press release from the governor’s office.

“Over the year, wage and salary employment increased 51,300, with gains in the education and health services sector (+14,000), the professional and business services sector (+13,900) and the trade, transportation and utilities sector (+5,700), among others,” the press release states.

“We continue to be encouraged by the job growth in Alabama,” Labor Secretary Fitzgerald Washington said. “Many of our industries are seeing record high employment, and wages are maintaining strong year over year growth as well.”

Shelby County remains the county with the lowest unemployment at 1.7%