Skycop cameras making a difference in short time for Thorsby 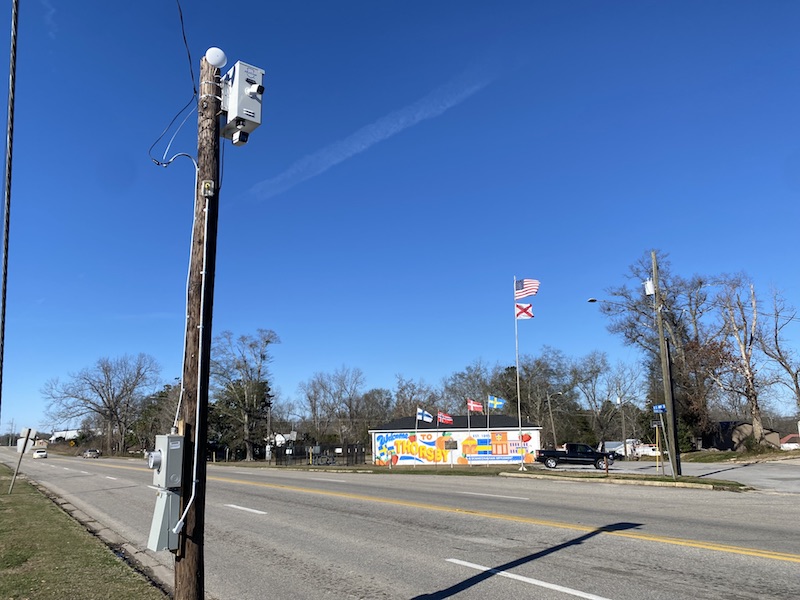 The city of Thorsby put up two Selcom Skycop cameras on Highway 31 through downtown to help deter crime and keep track of who is coming through the city. (CAREY REEDER | ADVERTISER)

During the summer, the city of Thorsby erected two new Skycop cameras to help deter thieves and keep track of the hundreds of cars that travel through downtown every day. Just a few months later, Thorsby Police Chief Rodney Barnett has seen them help in numerous different ways.

Barnett presented the Thorsby City Council with a proposal for the Skycop cameras at the May 2 council meeting. The cameras were up and fully functional by the end of July with one by the pharmacy and the other closer to Thorsby City Hall. The cameras are full color and have a zoom capability. Thorsby police officers can access the camera feed through an app on their phones.

There are tag readers on the cameras. If a tag is picked up and the car is registered in the National Crime Information Center, the cameras send information on the car directly to the officer’s phones. The information includes the direction the car is traveling, the tag number, the color and how many occupants are in the vehicle.

“They have done really well, and they are really nice to have,” Barnett said. “It has worked out really well for us, and it is continuing to … they are performing really well.”

Thorsby has had two pharmacy break-ins over the past few years, which was the biggest reason for getting the cameras.

“In the event of a burglary, or any type of crime for that matter, we can go back on that camera and see tag numbers, or possibly people,” Barnett said.

The cameras are used solely for criminal investigations, not traffic-related violations. The purpose of the cameras is to help Thorsby officers locate a stolen vehicle, locate a person with arrest warrants or help find a child that has been abducted.

“The officer on duty would have a real good chance at spotting that vehicle because it is not a delay, the alert comes within minutes,” Barnett said. “We have been able to stop several people.”

There are many instances the cameras have already helped out. Just after the cameras were put up they caught a tag from a car that was registered as stolen in the NCIC database. The police officers pulled the car over, and it was determined the place where the car was originally stolen forgot to take it out of the database, and the matter was cleared up.

About a month ago, a TPD officer noticed around noon the stop sign by Thorsby High School was knocked over, but knew it was still standing at the start of the school day. The officer went back on the camera footage and could see a truck hauling a trailer clip the sign and knock it over.

Another time, a puddle of fluid was covering the parking lot by the Thorsby Police Department. The officers were able to go back on the camera and determine it was the garbage truck leaking hydraulic fluid, not one of their cruisers needing maintenance.

Selcom, the electronics company who made the cameras, has seen them work well in cities such as Selma who have had them for a while. Thorsby paid for the cameras out of its American Rescue Plan Act funding, and the city spent only a few hundred dollars for some of the electrical hookups for them. The lights were flashing blue on top of the cameras but were recently turned solid blue, but that did not take away any of the functions the cameras provide.

“Someone who may not be familiar with the camera, or even if they are, they are not sure if it checks speed or not. Although it does not check speed, it has slowed people down,” Barnett said. “It has been a win-win for us. I get a lot of questions about the cameras, and I tell people the truth, but if they do not know it and they want to believe it is for speeding, let them. It slows them down.”

The cameras have helped catch little things, such as the stop sign being knocked over and finding where fluid is coming from. However, the cameras are a tool to protect the residents of Thorsby, if a more serious situation presents itself.