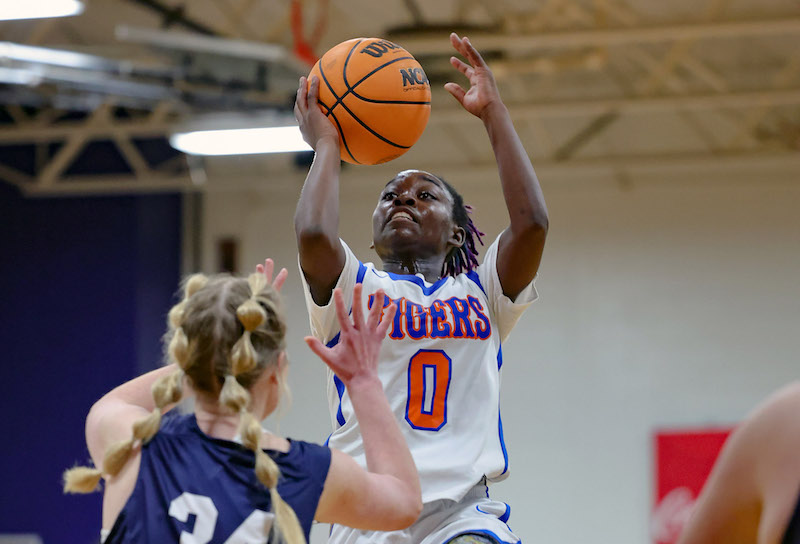 The Chilton County High School varsity girls’ basketball team traveled to Gulf Shores to participate in the Christmas Bash at the Beach basketball tournament from Dec. 19-21. The Tigers won their first two games of the tournament before falling to Theodore High School 46-34 in the championship game.

Chilton County’s dynamic duo of Iasia Anderson and Trinity Pulliam put on a show on Dec. 19 against West Florida High School helping the Tigers to a 47-39 win. Both Pulliam and Anderson posted triple doubles in the first game of the tournament. Anderson had 31 points, 11 rebounds, 11 steals and seven assists, and Pulliam tallied 10 points, 15 rebounds and 10 blocks.

However, both Ishunti Brown and Tyonna Booker had double-digit rebounding efforts against West Florida with 15 and 11 rebounds, respectively, to assist Anderson and Pulliam.

“I think the girls had a great experience down there and we had a lot of players step up in the tournament,” CCHS coach Rickey Pulliam said. “We have players now helping out both Iasia and Trinity, and it is helping us win.”

In the semifinal on Dec. 20, CCHS faced off against the host school Gulf Shores High School. While Anderson led the Tigers with 14 points and added eight rebounds, assists and steals, Varner posted 11 points, four rebounds and three assists as the second-leading scorer in the game. Trinity Pulliam did post her second triple-double of the tournament with 10 points, 17 rebounds and 14 blocks to boost CCHS to a 50-40 win and a spot in the championship game.

“The other players stepping up has been the reason for our success,” Rickey Pulliam said. “Teams were trying to figure out Trinity and Iasia, but now we have other players making plays and that has really made the difference for us.”

Theodore got the best of CCHS in the title game and broke their four-game winning streak. After the loss, the Tigers have won eight of their last 10 games dating back to Dec. 1, and Rickey Pulliam attributes that to his girls aggressive practice habits.

“It all starts in practice for them,” Rickey Pulliam said. “The more teams we play, the more teams will try to take them out of the game. They go to practice working on the things teams try to do to take them away, and they have actually gotten better because of that.”

The most important portion of the CCHS schedule is on the horizon after Christmas break. All four region games for the Tigers are within 12 days of each other between Jan 12-24. After 19 games this season, Rickey Pulliam is in the wheelhouse of his preseason speech to his team.

“We had a plan going into the season of how we wanted to be playing by game 18, because we understand the last 11 games count more than the games we have already played,” Rickey Pulliam said. “We are not satisfied because I think we can get a lot better, but I do like the defense the girls are playing right now.”

Chilton County (12-7) is in action on Dec. 29 on the road at Thompson High School to make up for a game missed on Nov. 29. The Tigers have one more game after that on Jan. 10 against Montgomery Academy before the region schedule starts.