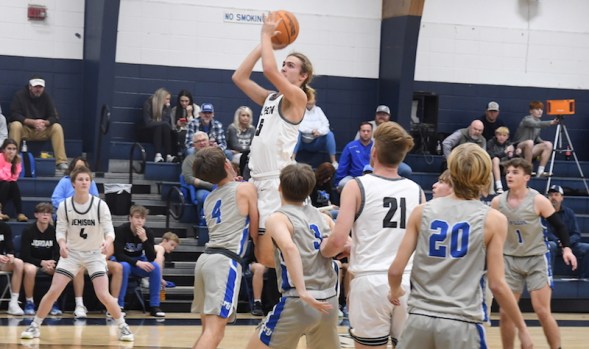 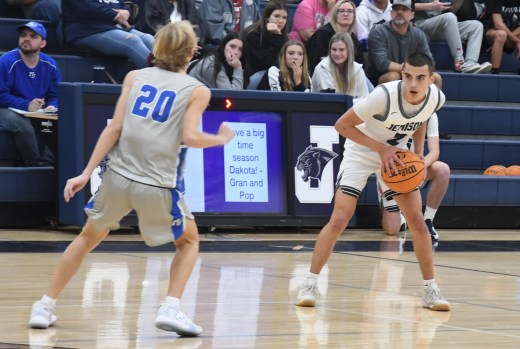 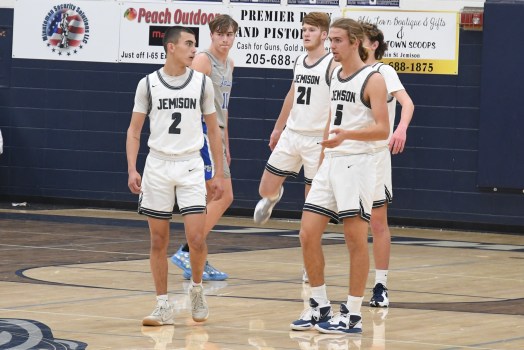 Jemison discussing the game plan during a timeout on the floor. (CAREY REEDER | ADVERTISER)

The Jemison High School varsity boys’ basketball team had a matinee matchup on Dec. 16 with Mortimer Jordan High School that saw the Panthers fall 56-39 at home. Jemison was led by Blake Calloway with 15 points in their last game before Christmas break.

Mortimer Jordan jumped into an extended press right out of the gate, forcing the Panthers into turnovers turning them into easy buckets. Jemison was in a 20-6 hole after the first quarter. That lead bloomed to 26-8 early in the second quarter, and Jemison coach Christian Goodwin decided to send a message and sub in an entire new five on the floor. The Panthers responded with an 8-2 run to cut the lead to 28-16 midway through the second quarter.

Calloway went on a 7-0 run himself later in the quarter to cut the lead to seven points, the closest Jemison had been all half.

“We responded really well after that, and to get it under 10 by the half is credit to our guys,” Goodwin said. “We just cannot turn the ball over like we did, and we are learning to play in close games, so when you put yourself in that type of deficit you cannot expect to come back right away because it takes time to claw back from something like that.”

Two free throws from Tucker Bradford just before the half sent the Panthers into the break trailing by eight points.

The third quarter was a back-and-forth affair with the Mortimer Jordan lead bouncing between seven to 12 points. Jayden Managan hit a 3-pointer and a floater to cut the lead to nine, and Calloway added a layup to cut it to seven again at the end of the third quarter at 39-32.

However, Jemison could not get closer than seven.

“Sadly, the scoreboard is the teller of a game,” Goodwin said. “I thought our guys played hard and worked hard to get back into the game.”

Mortimer Jordan hit a 3-pointer with 3:50 left in the game to extend their lead to 12 points and force a Jemison timeout. Mortimer Jordan ended the game on a 10-2 run to sprint to the 56-39 win.

“That is a team that exposed some things for us, which we needed, and that is good,” Goodwin said. “It would have been really easy to lay down with the last game before the break, middle of the afternoon, but we gave ourselves an opportunity … proud of the way we came back and fought.”