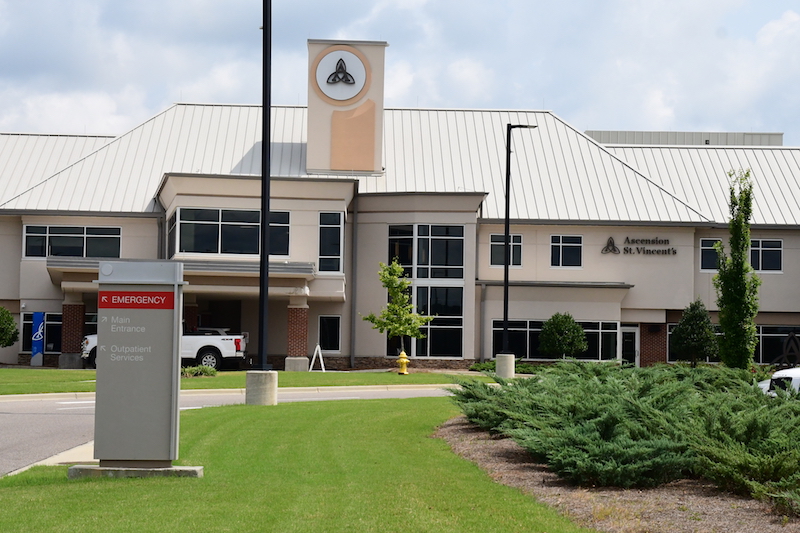 On Dec. 15, 2022, the Ascension St. Vincent’s Chilton Wound Care Center reached a one-year anniversary of opening its doors. Led by Dr. Jon Binkerd and nurse practitioner Amy Weldon. Weldon sees virtually every patient that comes into the wound care center, and Binkerd will offer his expertise in more difficult or complex cases and to perform surgeries.

The wound care center began with patients Binkerd had previously seen, and it has now grown to over 100 patients, conducted over 1,000 clinic visits and healed 138 wounds in just one year.

“It has taken off and done really well,” Binkerd said. “We have seen it develop within just a year, which is pretty quick growth.”

When recalling the hundreds of patients Binkerd and the wound care center team have seen the past year, two patients stood out to them as cases that were extremely successful.

It all began in April 2018 for Roy Lucas who stepped on a two-inch screw, and had no idea because he had neuropathy, or numbness of the feet. The screw was in his foot for almost 24 hours, and it began to turn black and blue. Lucas was referred to Ascension St. Vincent’s Birmingham. Lucas had two operations there on his right foot that cut the whole bottom of his foot off.

After the surgeries, Lucas began to develop foot ulcers, or blisters as he called them, that never healed.

Lucas’ local physician in Maplesville recommended Binkerd, and Lucas scheduled an appointment with him. Right before his appointment, Lucas’ big toe on his right foot began to get worse. Binkerd told Lucas his toe was dying from the inside out, and the toe had to be taken off immediately. Surgery was performed to remove the toe.

Binkerd told Lucas about the wound care center that was opening at St. Vincent’s Chilton. He thought the services would be very beneficial to Lucas, and since they offered more services than Binkerd’s office did.

Lucas’ infections became worse, and he got within hours of losing his foot. As he sat in Binkerd’s office, he cried and wanted to call his brother, but the nurse said there was no time for him to call his brother due to the time sensitive situation.

Lucas started treatment the day after the wound care center opened its doors for the first time.

“Those nurses over there knew what they were doing, and to me. it felt like they were more angels than nurses,” Lucas said. “The way they treated me was great, and the word St. Vincent’s to me means it is the way the doctors and nurses treat you.”

Binkerd made a call to try a different treatment, outpatient IV antibiotic therapy. Lucas had to come to the office four times a week to receive the infusions, and he was the first patient at the wound care center to receive this type of treatment.

After a few days of treatment, Lucas said his energy came back and his will to want to get better improved.

However, the infection came back again, and the doctors had to act fast with how aggressive the infection was. Lucas went back on the antibiotic infusion, this time for three to four hours every day for seven weeks. In between treatments, the nurses took Lucas’ blood every other day to make sure the antibiotics were not affecting his kidneys due him having kidney failure.

“They were on top of all of that,” Lucas said. “I remember the last day, and they did an x-ray on my foot, and it showed I did not have any infection in my bone at all. The wound on the side of my foot … it ended up getting well, too.”

Lucas graduated from the wound care center for a third time after eight surgeries on his right foot. Lucas said he now has no problems whatsoever now.

“He had some complications with some of the medications we gave him, and we adapted, changed and did what he needed, and now he still has a foot to stand on,” Binkerd said. “I think he is a major success we have had here. Having everything there so we were able to do it inhouse … I think that is a great example of what the wound center can provide in association with St. Vincent’s Chilton.”

Lucas said he stops by and sees some of the nurses and doctors who provided the care for him because he considers each of them like family.

“I kind of miss going over there because I went for so long, I consider the nurses and Dr. Binkerd a part of my family,” Lucas said. “They showed a lot of care for me as a person, and I will never forget that.”

Conlee had a bunion surgery at a different hospital outside of the Ascension system in March of this year, and her incision became infected after the surgery. At first, she thought the pain after the surgery was from the surgery itself, not the infection, but that was not the case.

She had known about the wound care center after her sister received three months of help from the center. When it was recommended to her, she did not hesitate to go.

“I was so lucky to have known about the clinic, because I could not imagine driving to Birmingham three times a week,” Conlee said. “It is much needed here (in Chilton County).”

When Conlee arrived at Binkerd’s office for her appointment, he told her to go straight to the hospital because she was within days of losing her foot. Conlee stayed in the hospital for three days, was given antibiotics and had surgery to clean out the infection.

After consulting with the doctor who performed her bunion surgery, it was determined that the metal that was placed in her foot needed to come out as it was causing the reoccurring infections. Hardware like screws, plates and mesh can harbor bacteria for long periods of time and cause infections. Material that is implanted into a wound is almost impossible to get uninfected once it becomes infected, according to Binkerd.

The plan was to get the infection at bay enough to take out the hardware. A short-term wound vac, which is a negative pressure therapy, was given to Conlee to treat the infection before and after the hardware was removed. She went three times a week to address the wound, and three to four other incisions had also opened up and were at risk of becoming infected as well.

After the hardware was removed, Conlee began to feel much better, and the infections subsided.

“They were so kind and professional. If I was worried about something I called and they would talk me through it, and they helped me save my foot,” Conlee said. “They were so patient and worked so hard on it, and I know it was not an easy thing they did, but they worked with me.”

Conlee then was able to come just once a week for treatment and learned how to address and change her bandages at home to continue her road back to full health.

“We are getting better because of the staff we have,” Binkerd said. “Like anything, the more you do it the better you get at it, and we are seeing more patients. After a year, we have more experiences, we have learned from our successes and mistakes, and it is continuing to provide progress for our patients.”

The Ascension St. Vincent’s Chilton Wound Care Center is already looking to expand its facility and staff to accommodate the new patients they have coming in for treatments during its next year of service.