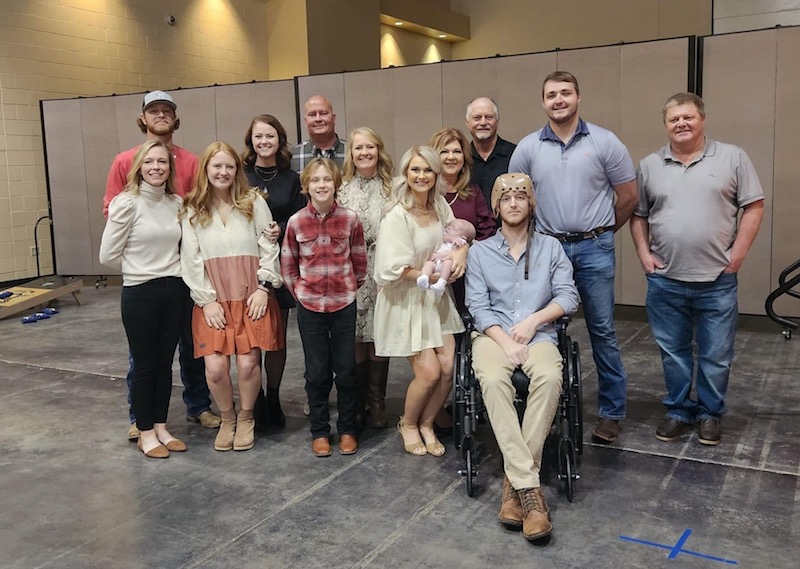 Deputy Tyler Smitherman was surprised to see a family from a call he had responded to at the annual Chilton County Sheriff’s Office Christmas party.

The Crumpton family of Verbena had made a point to be there to express their appreciation to Smitherman for saving Blake Crumpton’s life.

Smitherman was recognized by CCSO with a Lifesaver award at the event.

“The doctor told us when we got to the hospital that if myself and Tyler … had not done chest compressions when we did, Blake would not have made it,” Haley Crumpton said. “… They said we saved his life.”

She and extended family wanted to show their appreciation “and show him how big of an impact he did have on that situation on that night.”

“It was very heartwarming,” Smitherman said. “… It was good to see where they (the family) appreciate all the way through … not just the doctors who helped get Mr. Crumpton back, (but) all the way from the first second where there tragedy started.”

Smitherman has been with the CCSO for a year.

“That is all I wanted to be able to do with this career is help people,” Smitherman said. “… It was a feeling of accomplishment and a heartwarming feeling at the same time to see that something that I had an effect in initially helped save somebody’s life.”

“With any call, you never know what you are going into,” Smitherman said, because things can change “in a matter of seconds.”

When he responded to the Crumpton residence, on Sept. 19, he had a general idea of what was going on.

“At about 1:17 a.m., (Blake) was taking like four shallow breaths and then he was having to stop for a minute,” Haley Crumpton said.

She thought he was having an asthma attack, and got his inhaler for him. Then, she realized he was unresponsive.

She called 911 and the dispatcher said chest compressions needed to start immediately. Haley was eight months pregnant at the time, but managed to get her husband off the bed and on to the floor to begin the compressions.

She said she had been able to stay calm on adrenaline before emergency workers arrived, but as what was happening began to sink in it was more stressful. She said she was most thankful for Smitherman helping her stay calm.

Smitherman said that while Blake Crumpton’s condition was his main concern, he was also concerned for Haley Crumpton being pregnant and dealing with the situation.

The Crumpton baby was among the family members that attended the CCSO Christmas party.