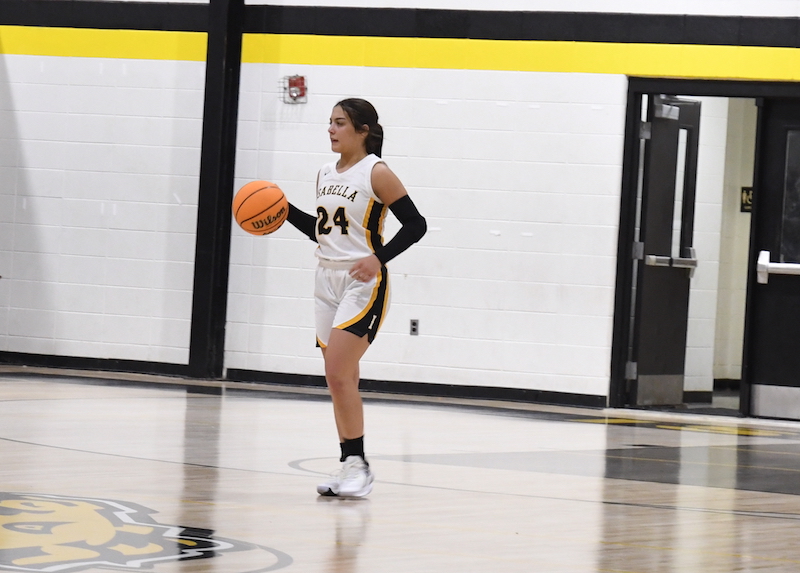 Amelia Fjeldstad is this week’s athlete of the week after helping lead the Isabella High School varsity girls’ basketball team to a 3-0 record during the week of Dec. 5-9. Fjeldstad averaged 19 points per game over the three contests last week. Her highest scoring output was on Dec. 9 against Thorsby High School when she put in 23 points and helped lead the Mustangs to the 52-47 win.

“She is bringing a lot of leadership this year… she is becoming a more complete leader on the floor for us,” Isabella coach Jared Day said. “She is playing well on the defensive side of the ball as well. She can just flat out play.”

“She has definitely stepped in and put a lot on her shoulders,” Day said. “She gets us in the right positions offensively, she takes care of the ball, never comes off the floor, and overall she is playing really well.”

After starting its season later into the fall, Isabella High School’s varsity girls’ basketball team has sprinted ahead of the other five Chilton County high schools to hold the best winning percentage in girls’ basketball so far in the 2022-2023 season at 5-1.

After a 0-6 start to the season, the Thorsby varsity boys’ basketball team rattled off four consecutive wins between Dec. 2-9 that included three wins over in-county opponents. On Dec. 2 the Rebels rushed Maplesville for a 71-44 win and followed that up with a 65-41 win over Billingsley High School on Dec. 5. A 42-36 win over Jemison High School and a 56-50 win over Isabella extended the Rebels winning streak on Dec. 8 and 9, respectively.

Thorsby fell to Holtville High School on Dec. 12 on the road 72-50 to have its winning streak snapped, but a 4-7 overall record so far this season is a long way from their sluggish start to the year.