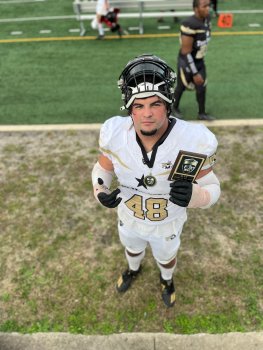 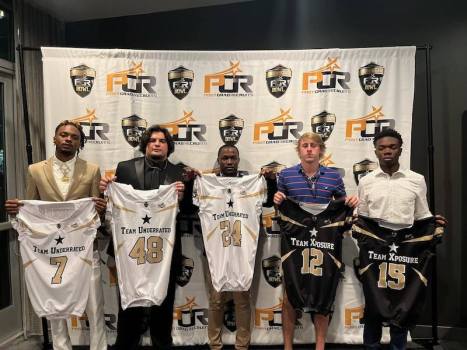 Anthony Fjeldstad, second from left, with the other four players from the Fountain City Prep Pirates who played in the bowl game. (FOUNTAIN CITY PREP PIRATES | CONTRIBUTED)

Former Isabella High School lineman Anthony Fjeldstad was named the MVP of the 2022 Post Grad Recruits All-Star Bowl game on Dec. 5 in Daytona Beach, Florida. The Fountain City Prep Pirates, formerly the Chilton Prep Academy Pirates, product recorded 13 tackles with six of those for a loss, two and a half sacks and 15 quarterback pressures that led to multiple turnovers.

Fjeldstad was asked to play on both the offensive and defensive lines in the game and played both ways for the entire game. Fjeldstad was a member of Team Underrated who won the game 12-6.

“It was a really fun experience,” Fjeldstad said. “I do not like bragging about myself, but I know what I am capable of doing, and when I went down there, I knew I was going to do well.”

The post grad programs, such as the Fountain City Prep Pirates, give high school graduates an additional two years to compete against other recent graduates looking to continue to get film together for college coaches. Most players in these programs attend a local community college to do their basic college education, like Fjeldstad who attends Jefferson State. If signed, the player moves on to a four-year college where they have four years of eligibility, and can jump directly into their degree studies already holding their basic college credits.

Fjeldstad graduated from Isabella in 2021 and jumped straight into the Fountain City program.

At the bowl game, Fjeldstad said he met different coaches and players and competed against the best post grad players in the country from states as far Michigan, Arizona, New York and New Jersey.

Fjeldstad earning this valuable experience can set him up well going into the college selection process, and the world of the transfer portal in college football today.

“This transfer portal stuff and why college coaches take those players over high school athletes is the college experience they have,” Fjeldstad said.

Fjeldstad is witty and understands the business side of college football, which can go a long way in understanding his value. He understands the value of an offensive lineman while being a defensive lineman by trade. Being able to show college coaches he can play on both sides of the ball is a tremendous skill to put on tape. So, when he was asked to play both ways during the bowl game on Dec. 5, Fjeldstad did not hesitate.

Offensive lineman are few and far between, and are one of the most injury prone positions on a football field.

“No matter what division you are in or where you are at, it is hard to find offensive lineman,” Fjeldstad said. “When they asked me to step in I did, and I did my job.”

Fjeldstad is able to come back to the Fountain City Prep Pirates program next season, if he does not sign with a four-year school. However, he does have some interest from schools in the state such as Samford, North Alabama and West Alabama and some other schools in the southeast.

Regardless of the pending decision, Fjeldstad will have his experiences on the football field to lean on through it all.

For Fjeldstad, it is faith, family, friends and then football. After mental toughness, Fjeldstad said football has taught him to believe in himself and the dreams he has. He remembers attending Alabama state football prospect camps, and they always told him “that you have the talent, but you are not tall enough.”

“I want anyone out there in the world to know it does not matter how tall, big or fast you are,” Fjeldstad said. “If you have the fight in you and have a dream, anything is possible just do not ever give up on that dream.”