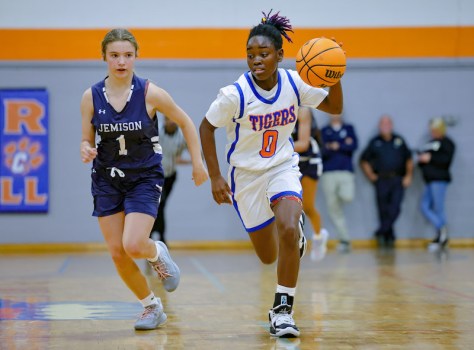 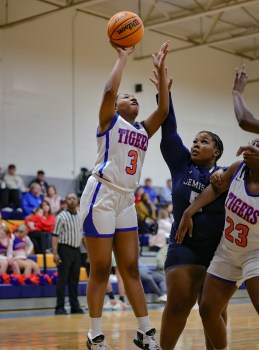 The Tiger’s Ishunti Brown goes up for a layup. (BRANDON SUMRALL | SPECIAL) 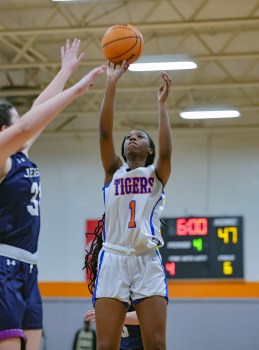 The Chilton County High School varsity girls’ basketball was led by three double-digit scorers to catapult to a 61-22 win over Jemison High School on Dec. 2. Iasia Anderson, Trinity Pulliam and Ivyonna Varner recorded 45 of the 61 points scored by the Tigers.

Anderson led the trio with 17 points on 50% shooting from the field, and recorded a quadruple double adding 15 steals, 13 assists and 10 rebounds to her totals. Pulliam recorded a double-double with 16 points and 15 rebounds, and blocked seven Jemison shots. Varner’s 12 points were paired with five steals, four rebounds and three assists.

“Those three have put in the work and stayed true to the process of getting shots up,” CCHS coach Kelvin Sterling said. “They are coming along very well, and it has given us some depth, and it is really making the game easy. If they can continue that, then we will be just fine.”

Jemison’s Jaclyn Lowery and Zariyah Johnson each knocked down a 3-pointer to put the Panthers ahead 6-5 early in the first quarter. However, it was the lone lead Jemison would hold in the game after an Anderson 3-pointer and a Pulliam layup put CCHS up 10-6 after the first quarter. The Tiger’s lead bloomed to 12 at halftime up top 25-13.

The Tigers started the third quarter on an 11-0 run before Lowery hit a 3-pointer for Jemison to halt the run. From there, CCHS allowed just six more points from the Panthers the remainder of the game. Lowery led Jemison with eight points, and Johnson followed behind with seven points.

The Tiger’s Serenity Reed was a perfect 3-for-3 from three-point range in the fourth quarter to post nine points.

“The last couple of games our confidence is rising, and the way we are practicing is getting better,” Sterling said. “I think they are starting to feel it in a way and gaining confidence and traction you want to see that says, ‘hey we can do it.’”