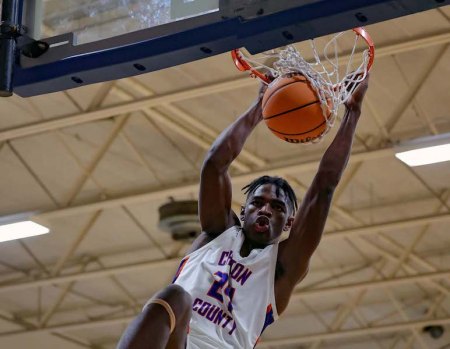 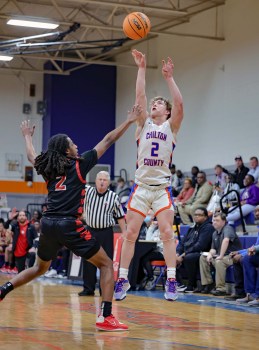 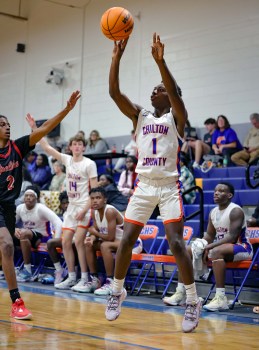 The Tiger’s Justin Godwin pulls up for a shot. (BRANDON SUMRALL | SPECIAL)

The Chilton County High School varsity boys’ basketball team showed no signs of a Thanksgiving hangover throttling Opelika High School 71-49 on Nov. 28 at home. The Tigers won every quarter in route to their fifth win in a row, and their sixth out of the first eight games this season.

“As a team, we are starting to fill out what us as a coaching staff want them to do and how we want to play,” CCHS coach Austin Moncus said. “I think guys are starting to settle into the roles and are understanding what they do well to help the team.”

The CCHS defense was stifling in the first quarter holding Opelika to just five points while scoring 13 points themselves. Jamon Dejarnett knocked down two 3-pointers to start the game, and the Tigers jumped ahead 8-0 early. Marshall Thornhill knocked a 3-pointer as well in the opening quarter to aid the Tigers. Dejarnett had 13 points for the Tigers.

CCHS carried over their hot shooting into the second quarter with Demarrion Caffey knocking down two 3-pointers to stretch the Tigers advantage to a 10-point lead at 19-9. Caffey knocked down another 3-pointer later in the quarter, and the Tigers took a 26-15 lead into the halftime break. Caffey was the co-leading scorer for the Tigers with 14 points.

As a team, CCHS knocked down 11 3-pointers against Opelika.

“When we shoot the ball that well and play defense like we did, we are a tough team to beat,” Moncus said. “Shooting is a confidence thing and you gain that confidence from reps and putting the work in, and our guys have done that. We want our shooters to shoot the ball, if they are open.”

The Tigers began to flex their muscle in the paint in the second half behind Latavion Floyd. Floyd was the other Tiger with 14 points to pace the team. However, the 3-point shooting continued later in the third quarter with Eli Dale, Justin Godwin and Caffey all knocking down 3-pointers to push the lead to 50-34 after three quarters.

The Tigers took six charges in the game, and they managed their lead the remainder of the game to cruise to its fifth consecutive win.

“It is still early, but I know we are playing good ball right now and playing as a team, and as a coach that is all you can ask for,” Moncus said. “You can control your effort, your attitude and your intensity, and if you control those three things, other things will fall into place the way that they should.”