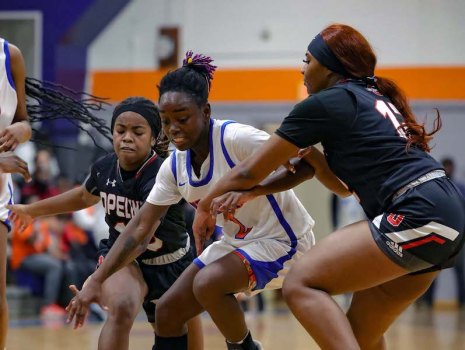 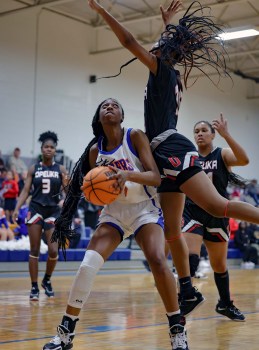 Trinity Pulliam works in the paint for CCHS against Opelika. (BRANDON SUMRALL | SPECIAL) 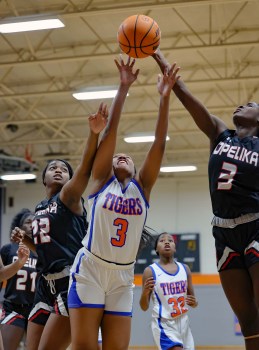 The Tiger’s Ishunti Brown goes up for a layup against Opelika. (BRANDON SUMRALL | SPECIAL)

After taking down its Thanksgiving tournament, the Chilton County High School varsity girls’ basketball team fell in its first game back from the break 56-33 to Opelika High School.

The Tigers had a balanced scoring effort with four players scoring at least five points. Ivyonna Varner was the leading scorer with eight points, and she added four steals to her totals.

Chilton County held its own in the first quarter holding a 17-15 lead after the opening frame. However, the Tigers were held to 16 points the remainder of the game due to a stifling Opelika defense.

“We came out in the first half and had some good energy, played some solid defense and did the little things right, and we were excited to play a talented team like Opelika,” CCHS coach Kelvin Sterling said. “Basketball is a game of runs and they made their runs, and it was a back-and-forth type of game.”

The Tigers leading scorer Iasia Anderson had seven points, 10 rebounds, eight steals and five assists, but shot just 2-for-15 from the field. Trinity Pulliam was also held in check putting in five points, but grabbed 12 rebounds and blocked eight shots. Ishunti Brown led the Tigers on the boards with 15.

While CCHS came out on the wrong side, Sterling said the difficult schedule that the Tigers have will pay dividends later in the season.

“It is making us battle tested, and I believe if you want to be the best you have to beat the best,” Sterling said. “It is going to help us going further into the season.”

“This is a process, and that is what we are teaching right now is trusting the process and the work you put in,” Sterling said. “It is going to pay off for us … our phrase is we are in an 18-game season before area play starts, then it counts more.”