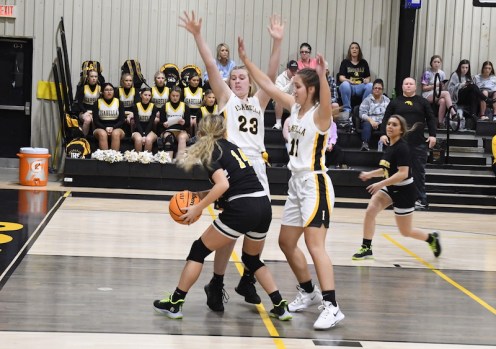 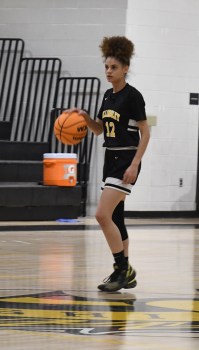 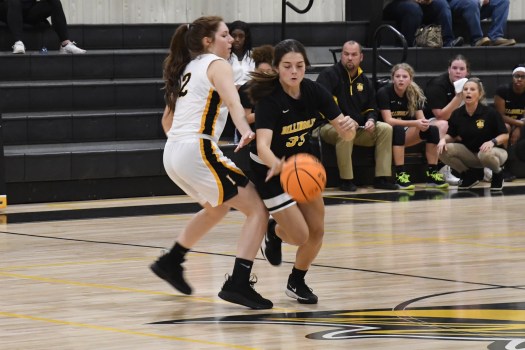 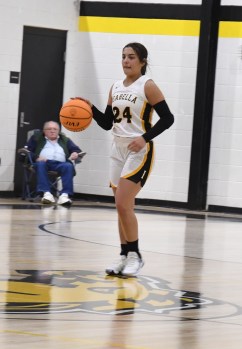 Amelia Fjeldstad brings the ball into the frontcourt for Isabella. (CAREY REEDER | ADVERTISER)

The Isabella High School varsity girls’ basketball team started its season on the right foot picking up a 62-38 win over Billingsley High School on Nov. 28. The Mustangs were paced by Lexi Higgins with 20 points all coming in the second half including six 3-pointers. Higgins went on a 15-0 run in the third quarter by herself on five 3-pointers.

“When she gets hot, you just have to get it into her hands … she is special when she is on,” Isabella coach Jared Day said. “It is big when she does that, but when they try to put someone else on her to take her away, we have others who can make shots too, so you really cannot do that to us.”

The lead changed hands five times in the first four minutes of the game before buckets from Isabella’s Makayla Logan, Amelia Fjeldstad and Deasia Wilson put the Mustangs ahead 20-7 after the first quarter.

Logan made an impact in the second quarter converting an and-one layup to extend the Isabella lead to 36-15 at halftime. Logan had 13 points.

“Overall, I thought we played well,” Day said. “We started off rusty shooting, but defensively we played really well … we have to work on a few things though.”

Billingsley coach Angela Jones said that she has seen the Bears discipline and togetherness on the court improve over the course of the first few games this season.

“For us it is a process and it is going to take some time for us,” Jones said. “It is all about learning each other … and a process in learning, working together and trusting each other.”

The Mustangs put on a shooting clinic in the second half with Higgins hitting her six 3-pointers, and Isabella Ballew knocked down one in the third quarter as well to push the advantage to 56-27 after three quarters.

“We were in foul trouble really early with some of our starters and that hurt us,” Jones said. “The subs who came off the bench played really hard and played well, and I am kind of doing some scouting on who to get more minutes because they did play so well.”

Breanna Cutler, who was averaging 18.5 points per game coming into the game, led the Bears with 18 points. Kaliya McCary had seven points for Billingsley.

Fjeldstad was the third Mustang in double figures with 13 points.

“I was very pleased and I thought we did everything we needed to do in the first game,” Day said.