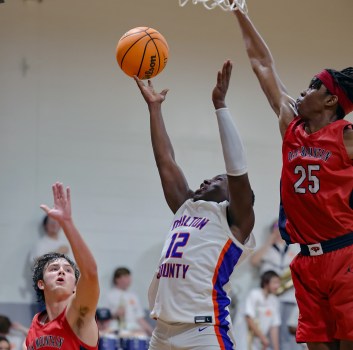 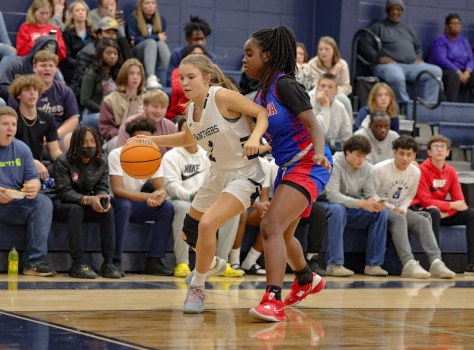 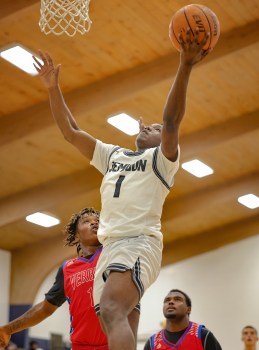 The Panther’s Jayden Managan flies in for a layup. (BRANDON SUMRALL | SPECIAL)

“We have played well recently, and hopefully that Thompson win is one we can build off of because we played so well and with a lot of energy,” CCHS coach Austin Moncus said. “That is something we are preaching to our guys right now.”

The Tigers lost 1,000-point scorer and senior Jakeveon Bolding due to injury prior to the season, and has been trying to find players to pick up some of those lost points. Moncus said he is planning on bringing up some younger players and freshmen from the junior varsity team to help get established rotation players a breather during games.

“We have to find some depth from some of the younger guys to come in and help us out in certain areas,” Moncus said.

The Tigers travel to Montgomery for the Alabama Christian Academy Thanksgiving Tournament from Nov. 21-22, and their schedule after Thanksgiving is littered with stout Class 6A and 7A competition.

“It will be a big week for us … and trying to stay on the winning track,” Moncus said.

The CCHS varsity girls’ basketball team dropped its three games from Nov. 15-18. Stanhope Elmore beat the Tigers 59-57 in overtime on Nov. 15, and Iasia Anderson and Trinity Pulliam did everything in their power scoring 24 and 17 points, respectively.

Thompson got the best of CCHS on Nov. 17 55-45, and Anderson led the Tigers in scoring again with 28 points. Marbury knocked off CCHS 63-39 for the second time this season.

Jemison High School had both of its teams play three games from Nov. 15-18. The varsity boys team dropped its first two games to Indian Springs and Holy Family Catholic high schools. Indian Springs jumped on the Panthers early and cruised to a 64-24 win on Nov. 15. Jemison held a lead against Holy Family Catholic on Nov. 17, but squandered it in the second half to lose 86-56.

The Panthers played their first three games on the road and captured their first victory on Nov. 18 over Verbena High School in its home opener 66-34.

“As much as the scoreboard, the energy from that game is what the kids can build off of because they are so excited,” Jemison coach Christian Goodwin said. “They want to get better, they are asking good questions, and they are asking to learn. Those are the kind of things that let me know we are heading in the right direction here.”

Goodwin said he hopes getting the first win of the season for the Panthers will help carry momentum the rest of the season.

“I am going to sleep the same way win or lose, and I am big on, especially early on (in the season), not letting the scoreboard define what our program is about,” Goodwin said. “To get a win early in the process of the long season, and to do it at home … that is how high sports should be.”

The Jemison varsity girls’ basketball team swept their three games from Nov. 15-18 starting with a 39-30 win over Indian Springs on Nov. 15. A 79-11 thumping of Holy Family Catholic and a 60-14 thrashing of Verbena followed on Nov. 17 and 18 to push the Panthers to 3-1 to start the season. Jemison is just two points away from a perfect 4-0 start after losing 43-41 to Oak Grove High School in its season opener.

Jemison coach Kelsey Mims said she has freshmen players contributing to the team more this season than previous years, and attributes the fast start to the season to that.

“I have a much deeper bench than I have in the past, so I can trust all 12 players if I need them to go out there,” Mims said. “That has been a challenge trying to find the right rotation because I do trust so many of them so much, but it has been good the last couple games getting to play everybody.”

Each of Verbena’s varsity basketball teams went 0-3 from Nov. 15-18 with losses to Jemison, Fayetteville and Holtville high schools and are still looking for their first wins of the season.