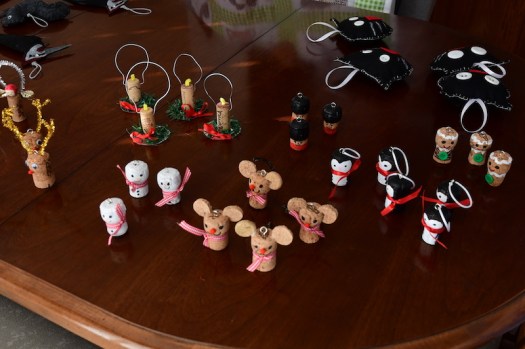 Cork ornaments are an inexpensive gift item at the bazaar. (JOYANNA LOVE | ADVERTISER) 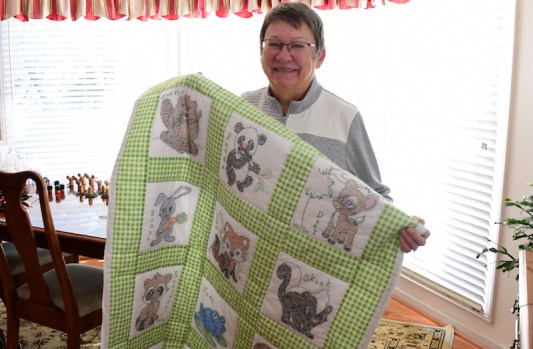 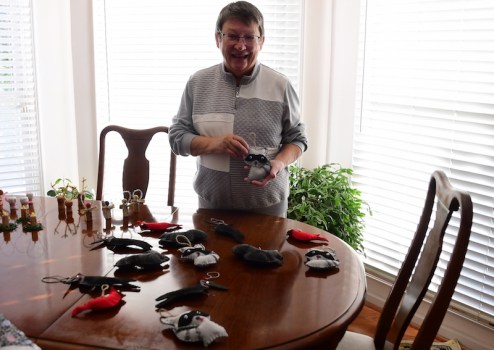 Cork ornaments are an inexpensive gift item at the bazaar. (JOYANNA LOVE | ADVERTISER)

Chestnut Creek Heritage Chapel’s annual Christmas Craft Bazaar is more than a fundraiser to preserve an historic building. It is a display of craftsmanship and fun. It is a labor of love by a group of crafters set on helping this community icon and spreading Christmas Cheer.

One such crafter is Dot Riley.

She works on projects throughout the year to sell at the event. What has sold well in the past is often used as a guide when thinking of new projects. Some of the projects are simple and quick. Others take a considerable investment of time. This means that the bazaar has something for every price range.

One quilt was a two-year project for Riley and her sister Ola Taylor.

“But it was fun, lots of fun, and I found out I could do things I didn’t know I could do,” Riley said.

Her work, along with that of several others, will be on sale from 8 a.m. to noon on Dec. 3 at the chapel, 11975 County Road 24 in Verbena. Cash, checks and debit/credit cards will be accepted.

Riley creates festive ornaments out of corks donated by her many neighbors in her condominium complex in Birmingham. She initially found the idea on Pinterest.

“I think the first thing I did was the angels,” Riley said.

She then created a mouse and has added more as time went on. New for this year, she has created a candle ornament.

The small ornaments can be priced inexpensively and have been a favorite for those looking to buy in bulk at the event.

“A lot of people come to the bazaar thinking I am going to get something for everyone in my Sunday School class, so they can do something like this,” Riley said.

Her felt woodland creature ornaments are also popular item for those looking to buy for several people. Initially, she had purchased an owl ornament in an antique shop, then figured out how to make something similar to sell at the fundraiser. Each ornament is finished off with a blanket stitch.

“It is very effective, and it looks handmade,” Riley said.

To expand the woodland creatures she could make, Riley found a way to print simple animal shapes and turn them into patterns. A squirrel ornament has been added to the collection for this year. Buttons, craft googly eyes and other embellishments give each ornament its character.

Last year, Riley’s cat-themed crafts and her aprons for children sold out.

Her favorite project for this year has been a queen-sized quilt that features a cross-stitch design.

Riley has enjoyed sewing and crafts practically all her life.

“We used to sew our own clothes, after we took home ec, and we learned how to sew,” Riley said. “I don’t remember a time when I didn’t sew.”

From there she got into counted cross-stitch, crocheting and making quilts.

Riley was a teacher and a principal in her career, and retirement gave her the opportunity to devote more time to sewing. She owned her own business doing draperies and throw pillows for a while.

In addition to unique hand-crafted items by the committee, several supporters of the chapel donate festive and vintage items to be sold at the event. Festive refreshments are also served, which encourages shoppers to sit and stay awhile. Attendees can also browse the chapel’s collection of historic photos during the event.