Barrett’s run for a cause sets new record 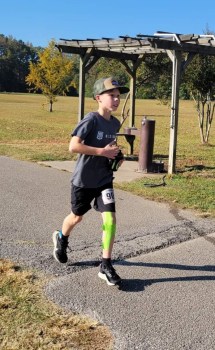 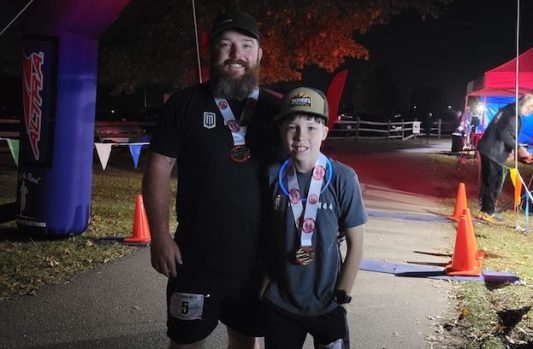 Richard Barrett, left, with Bryson Barrett after the two finished a race together. (RICHARD BARRETT | CONTRIBUTED) 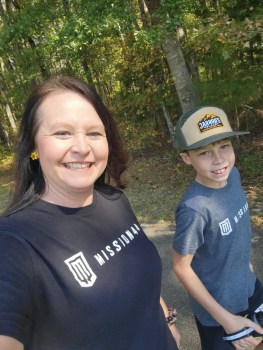 Bryson Barrett turned an opportunity to give back into a new Alabama state running record at the Endless Mile 12-hour Challenge at Veterans Park in Alabaster on Oct. 22. Bryson was running the challenge to help benefit Mission 44, a nonprofit in Alabama that helps children and families in hospitals with support and financial needs. Bryson raised $2,435 and ran 26 miles in the 12-hour time period. He also set a new Alabama state record for the fastest 20 miles ran by a 12-year-old at 7:04:33.92, according to staterunningrecords.com. Bryson turned 13 later in October.

“It was a good experience,” Bryson said. “It was really tough because you are just going in a one-mile loop around and around. It was a really good challenge, but that I knew I could do.”

Bryson’s father Richard is long-time friends with Grant Lowe, the founder of Mission 44. Bryson saw the unique ways Lowe raised money to help families such as riding a dirt bike for 24 straight hours, riding a mini bike from Los Angeles to Birmingham and doing 10,000 pushups in a month and wanted to get involved.

“I wanted to help them and raise money for the kids because they just need help,” Bryson said.

At 5 years old Bryson, Richard and his mother Sheena signed up to do a one-mile fun run at the YMCA of Chilton County, and Richard’s love for running wore off onto Bryson.

“We signed up and did it as a family, and him being 5 years old, I thought we would be walking a good bit,” Richard said. “About halfway through, I was starting to get tired because he was running a pretty hefty pace. I kept asking him if he wanted to stop and he didn’t, and he ended up running the whole mile.”

Bryson finished the mile run that day in less than eight minutes, and it was the fastest mile Richard had ever run, too.

“When I did that fun run, I just loved doing it after that,” Bryson said.

From there, Richard and Sheena helped Bryson expand his running by entering him other races over the next several years. Bryson has done the Lomax triathlon, ran the Peach Run the last three years and won his division in 2021, ran a 5k ran in Prattville, a 10k in Oak Mountain and done a kid’s Spartan Race.

“He just has a passion for running for some reason,” Sheena said. “That is why we let him do the 12-hour run because it was a challenge to him, and he wants to do it next year.”

Bryson, who goes to Isabella, wants to do cross country, but the school does not have a team. However, he plans on doing long distance running for the Mustangs track and field team in the coming years.

“I like to do trail running, and when I do, it gives me a challenge,” Bryson said.

Richard said Bryson has tried other sports such as football and basketball in the past, but nothing stuck with him as much as running has. Since the fun run at 5 years old, running has been Bryson’s biggest passion, and it has grown since getting into trail races. Richard allows Bryson to run any race 10k or shorter at his own pace, but any races longer than 10ks he makes him run it at Richard’s pace to preserve Bryson’s joints and energy later in life.

“He ran some of the trail races with me, and then he started running some of them ahead of me,” Richard said. “It has evolved into him running more and more races, and he really enjoys it.”

The next race on Bryson’s radar is the Lake Martin 100 on March 25, 2023 that features 100, 50 and 27-mile runs around Lake Martin. Bryson and Richard are planning on participating in the 27-mile race.