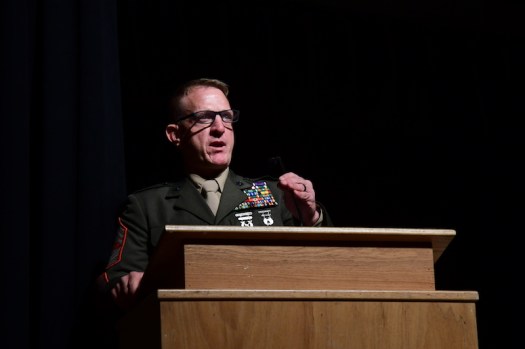 Retired U.S. Marine Corps veteran Jonathan Martin spoke on the debt owed to veterans and how to honor them. (JOYANNA LOVE | ADVERTISER) 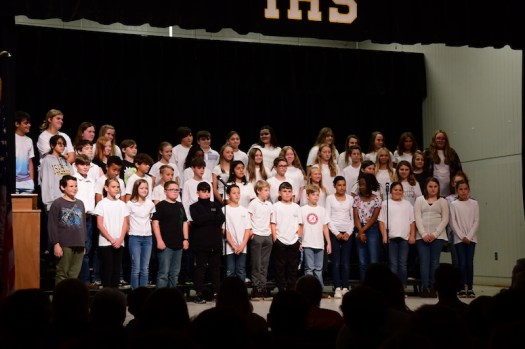 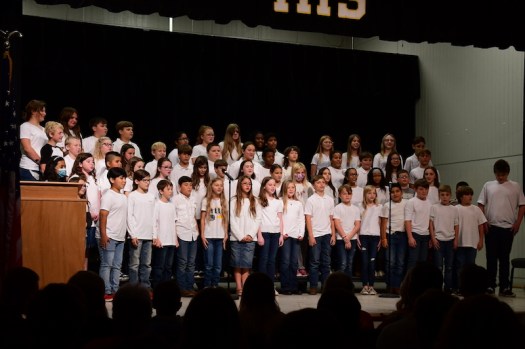 Isabella High School honored veterans connected to the school and community during its annual Veterans Day ceremony on Nov. 10.

The event is hosted by the school’s Historical Society students and faculty. It featured a slideshow of veterans connected to the school, patriotic songs and guest speaker U.S. Marine Corps veteran Jonathan Martin.

In his 23 years of service, Martin was deployed overseas nine times.

“My heart is full,” Martin said of the Historical Society’s program.

Martin emphasized that this country’s veterans have preserved and defended the freedoms of Americans during war when they were threatened but also during times of peace.

“The imposing presence of our great military has acted as a deterrent to would be aggressors,” Martin said. “The veterans of the United States military have not only fought wars, they deserve our gratitude for preventing them.”

He said the contributions of veterans need to be “honored with deeds, not just words.”

Martin said saying thank you to a veteran for their service was “just the beginning.”

“Americans can thank veterans by taking full advantage of all your rights that they have defended,” Martin said. “Live your lives to the fullest. Take advantage of the land of the free and the home of the brave. Be a good American. Stand for our flag and all veterans will be proud to know that their sacrifices were not in vain.”

He said those who join the military do so for various reasons, but all who serve play a vital role in keeping the country safe.

Military service was also a part of his family’s history.

“My grandfather was a Pearl Harbor survivor,” Martin said.

Martin started his military career in 1995. When he took his oath of service, Martin said he “knew I had joined a team bigger than I could ever imagine.”

He recounted the story of 17-year-old Marine Jack Lucas in the Battle of Iwo Jima who jumped in between a grenade and two Marines. Lucas was later awarded the Congressional Medal of Honor, “the highest military award for bravery,” Martin said.

“Lucas was left with more than 250 pieces of shrapnel in his body, including six pieces in his brain and two in his heart,” Martin said. “He endured 26 surgeries in the following months … He was an ordinary man who chose to do something extraordinary. I believe that everyone that chooses to wear our country’s uniform is doing something extraordinary.”

According to the U.S. Census Bureau, there are more than 19 million veterans. Martin said that is 7% of the adult population.

“These servicemen and women were not seeking personal gain or even fame,” Martin said. “Their country called, and they answered. They recognized their civic duty and acted accordingly. Our nation owes a great debt to its veterans, whose service spans every decade and continues every day.”

Veterans Day, originally Armistice Day, is commemorated on Nov. 11 because that is when the agreement that ended World War I was signed. The day originally recognized veterans of World War I specifically, but was later expanded to include all veterans.