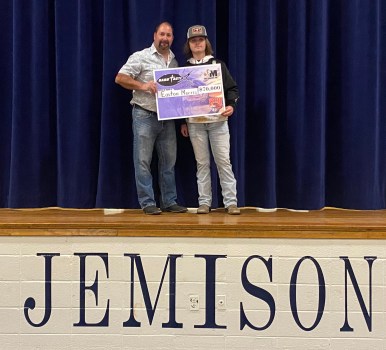 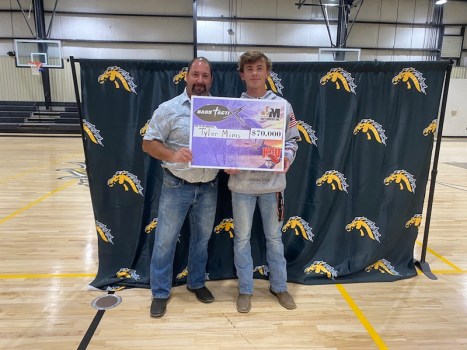 Chilton County anglers Tyler Mims of Isabella High School and Easton Morris of Jemison High School took down the Alabama Bass Tactix fishing tournament at Logan Martin Lake on Oct. 29. The duo fished for eight hours and competed against 18 other boats, and placed first overall reeling in 6.5 pounds of fish.

Mims and Morris were each awarded $70,000 scholarships to Kentucky Christian University and split $1,100 of cash and prizes.

“It was a great tournament, and I want to thank all my sponsors, especially The Fishing Hole for all the stuff I use,” Mims said. “It was a great experience with Bass Tactix and at Logan Martin Lake.”

All of the fish caught throughout the eight-hour tournament were added together to determine a winner, and Logan Martin Lake is not known to have very big fish.

Morris said the bites started off quickly, but they were few and far between in the middle portion of the tournament.

“We had some pretty good fish on the top water in the morning, but we missed some pretty big ones, and then it got real slow,” Morris said.

The last hour was very plentiful, and they added a pound and a half within the hour. Morris caught four more fish while coming up to the ramp at the end of the tournament.

“We ended up squeezing through, but I did not think it was going to be enough,” Morris said. “After the tournament, I was talking to a lot of people and most only had about four-to-five pounds, so I thought we might have a chance at this.”

One angler told Morris they had seven pounds of fish, but on the scale, it weighed in at 6.22 pounds.

“I guess it was meant to be,” Morris said.

“We were not expecting to win, but we were able to pull it off,” Mims said.

Alabama Bass Tactix is a youth fishing trail that has fishing from kindergarten to 12th grade. All competitors need is a partner that is in school, and they do not have to be from the same school.

There are four qualifying tournaments, a state championship and a national championship that is held in Alabama that ABT puts on during its season. Every tournament the competitors have a chance to win $140,000 worth of scholarships to Kentucky Christian University, and cash and prizes. KCU is one of the top collegiate fishing programs in the country, and is currently ranked in the top-25. ABT has been in Mississippi since 2015.

“We are a new (fishing) trail here that is just starting in Alabama,” Shane Mansell, director of Bass Tactix Alabama, said. “We are just trying to help out and get more done here in Alabama, and I know there is not another trail that for a single day tournament gives out that much.”

“They did great, and they jumped into it at one of their home lakes,” Mansell said. “They went out and hit it hard early.”

Morris began fishing competitively in the sixth grade, and Mims started two years ago. The two have known each other through fishing on the same trails in the past, and Mims’ dad and Morris’ uncle knew each other growing up.

“I fished well in some tournaments in the last year, and I have just been going from there,” Mims said. “I like the early mornings and the jitters you get at the blast off, and it is just really exciting.”

“My favorite thing is leaning into a big one, and I love catching big fish,” Morris said. “I like winning money and all that, but it is fun to just get out there and do the sport.”

Both Mims and Morris fish on the Airport Marine Fishing Trails and the King of the Coosa high school fishing trail. Both trails have tournaments before the end of the calendar month the two will compete in.

When asked about what makes a good fisherman, both anglers said the time spent on the water is what separates fishermen.

“I know some fisherman that stay out there seven days a week, and I am not 16 yet, but when I turn 16 I will be sure to put a lot more time into it,” Morris said.

Mims and Morris said they will compete on Feb. 25, 2023 at Smith Lake in the next ABT tournament to make sure they qualify for the state tournament.