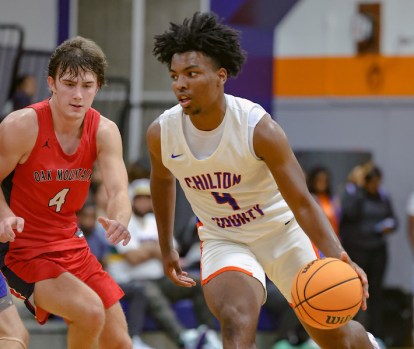 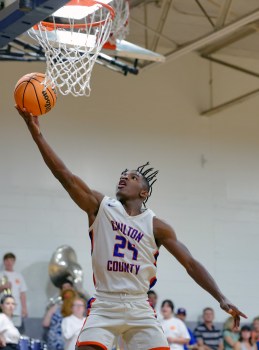 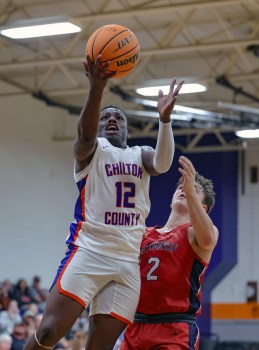 The Tiger’s Jamon Dejarnett makes a move to the basket. (BRANDON SUMRALL | SPECIAL)

Chilton County High School welcomed Oak Mountain High School to Clanton for the Tigers home boys’ basketball opener on Nov. 8. The Tigers kept the game close until the last five minutes when Oak Mountain was able to jump ahead and secure a 58-44 win.

Oak Mountain, who won the 2021 AHSAA Class 7A state title, held a 25-20 lead at halftime. In the second half, it was the Jakobe Worthy show for CCHS. Worthy scored the first six points of the second half for the Tigers, and then knocked down a 3-pointer to give CCHS a 33-32 lead.

Worthy was the only Tiger in double figures with 17 points, and he added eight rebounds and two steals.

The Tigers had nine players available for the game, and just five practices with everyone on the roster. CCHS was without senior and 1,200-point scorer Jakeveon Bolding who is out with an injury. CCHS coach Austin Moncus said he is hopeful they will get Bolding back after the start of the calendar year in January.

“I thought we played really hard, and our kids did everything we asked them to do,” Moncus said. “(Oak Mountain) is a really good program, and without a lot of practice time (before this game), I think we will be okay.”

Oak Mountain responded with a 10-3 run after the Worthy 3-pointer until two free throws by Jamon Dejarnett put the score at 42-38 at the end of the third quarter. Dejarnett had eight points, five rebounds and five assists.

“We want to be able to compete with bigger schools, and our schedule this year is brutal, but that is the standard we want to play at,” Moncus said. “I know it was a 14-point loss, but we were in it the whole time.”

CCHS cut the lead to two on two separate occasions in the fourth quarter. The first time behind two free throws from Eli Dale, and the second after a Latavion Floyd layup with five minutes left to make it 46-44. Floyd had six points and six rebounds.

Oak Mountain ended the game on a 12-0 run to secure its second win of the season in as many games.

“I think we took some bad shots that led to them getting out in transition, and we just ran out of gas,” Moncus said. “I am proud of them and our coaches, and as a program we did a good job. I love these kids.”

Oak Mountain jumped out to a 17-4 lead to start the game before Floyd ended the run with a layup, but the Eagles led 17-7 after the first quarter. Dejarnett opened the second quarter with a layup, and the rest of the quarter was slow for both teams offensively. Worthy ended the quarter with a pair of free throws and a layup to cut the lead to five points, the closest CCHS had been in the first half.

“We are going to use it as a coaching point and you always want to win the game, but I think for our program that is a win,” Moncus said. “You hate saying that about a loss, but we learned a lot about a lot of kids today. We have a long season ahead of us, and I think we are going to win a lot of games.”

Chilton County (0-1) travels to Marbury High School on Nov. 10 at 7 p.m. for its next matchup. Oak Mountain (2-0) hosts Northridge High School on the same day and time.