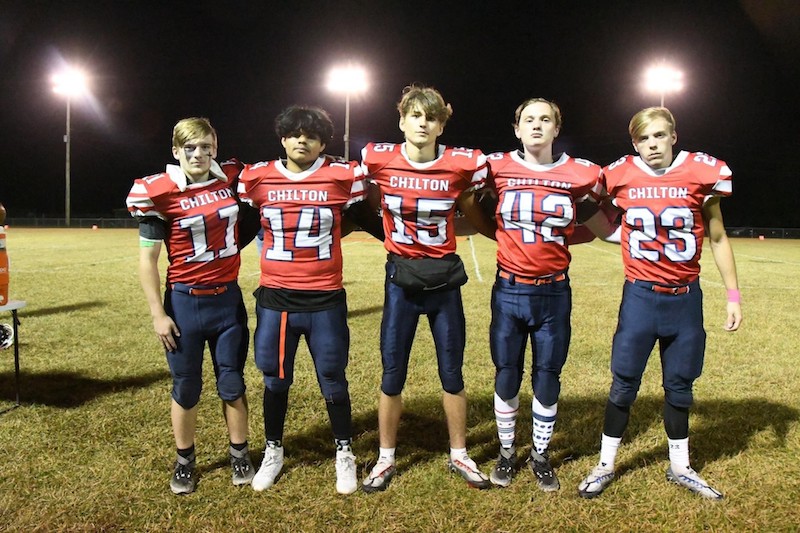 Seniors Mason McCary, Donovin Norcross and David Villegas received the awards from the voting of all six coaching staffs in the ACAA 6-man Christian Conference.

Donovin Norcross was also named an All-Conference player at running back. The senior piled up over 800 rushing yards this season and made over 80 tackles on defense. This season, he eclipsed 2,000 career rushing yards and 50 career touchdowns as well.

Chilton Christian coach Jay Norcross said Donovin’s best quality throughout this season was his leadership ability on and off the football field.

“He was always one who if he needed to say something to the guys he would,” Jay Norcross said. “Even though I would say something, hearing it from another player that has been doing it for as many years as he has is different.”

“His vision on the football field and his football IQ definitely went up from last year to this year to where he was able to make the cuts and break some tackles,” Jay Norcross said.

Villegas won his All-Conference award at offensive line for the Patriots. While his award came on offense, Jay Norcross was impressed with Villegas’ contributions on the defensive side of the ball this season.

“(David) stepped up big on the defense, and he improved so much on the defensive side of the ball,” Jay Norcross said. “He helped us out when other guys had to take a breather, and he stepped in and held down the defense as much as he could.”

Jay Norcross was named the 2022 Conference Coach of the Year. He said he wishes he and his team had a few more games on their schedule to see how their stats match up with traditional high school teams.

“Given at 11-man where they get to play 10-11 games a season … in our regular season we only played five games and two playoff games,” Jay Norcross said. “I could not imagine if we had just another three games what kind of numbers these guys would put up.”

Along with the three senior honorees, CCA’s Tucker Easterling and Jacob Merrill also graduate and leave the Patriots with a five-person void on its 16-man roster to fill.

“I am sorely going to miss them,” Jay Norcross said. “I have a bunch of seventh and eighth graders who are going to have to step up next year. Their leadership effect during the season was a trickle-down effect to teach these younger guys this year.”

Chilton Christian advanced to the 2022 ACAA 6-man Christian State Championship after reaching the semifinals in 2020 and 2021.