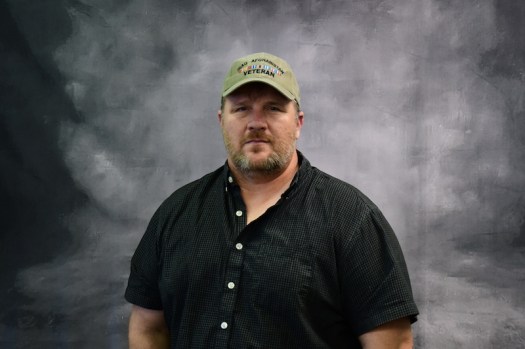 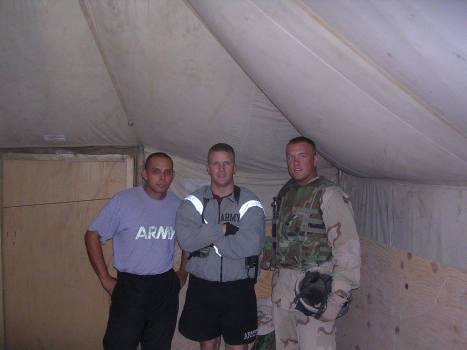 Barry Franks, center, served as the company commander when he was deployed to Iraq in 2003. (BARRY FRANKS | CONTRIBUTED)

After graduating from Chilton County High School, Barry Franks was unsure what he wanted his future to be.

Joining the Army Reserves helped him find a career he was well-suited for in the U.S. Army.

When he was younger, Franks had wanted to join the Air Force to be a pilot, but “in 10th grade, my eyesight went bad, so I couldn’t be a pilot,” he said.

He enrolled at the University of Montevallo after graduating high school, but had difficulty picking a major.

“I just didn’t know what I wanted to do,” Franks said. “I settled on psychology, and I still just wasn’t focused.”

Franks joined the Reserves, and attended six months of AIT basic training. This showed him the military was an environment he could thrive in.

“I enjoyed being a soldier,” Franks said.

He had key qualities the Army needed. He was an “early morning person, eats fast, runs fast, shoots really well, physical fitness, and these were easy (for me),” Franks said.

He completed his Bachelor of Science in psychology, then he enrolled in the UAB ROTC program. Upon completing the program, he was commissioned into the active duty U.S. Army in 1994.

Franks was especially interested in training for and filling an airborne role.

He told them “I want to do it all. I want to do airborne, air assault, ranger, jump master, the whole nine. I was fired up.”

Franks went on to train in all of these things in his career, which started in infantry and ended in logistics. He attended airborne school in the summer while attending the UAB ROTC, and he later completed ranger school.

“It was almost like a natural fit for me,” Franks said. “I really enjoyed it.”

His first assignment was a year in Korea as an anti-armor platoon leader.

He was then assigned as a lieutenant to the 2nd Battalion, 325th Airborne Infantry Regiment at Fort Bragg in North Carolina.

Franks wanted to continue his training and become a jump master (the person in charge of coordinating the airborne unit soldiers’ jump from the airplane). These qualifications would also be a next step to becoming an airborne commander, who manages the team to completing the objective on the plane and after the jump.

He returned to Fort Bragg in 2000 to the 82nd Airborne Division, where he worked up to company commander.

Franks was still stationed at Fort Bragg when terrorists attacked on Sept. 11, 2001.

“We were angry,” Franks said. “We wanted somebody to whoop. Somebody attacked our country … everybody was upset in the country, and we are the one’s that could do something about it then. We are the warriors that is what we do.”

There was an increase in military enlistments, especially from New York.

Franks was deployed to Iraq in 2003 as a company commander of a support team to the invasion and again in 2008. He was deployed to Afghanistan in 2010. He said everyone in his group came home each time, despite being in some difficult spots and some being wounded.

“Some of it is luck,” Franks said. “Some of it is what you do to figure out when the enemy is most active and kind of countering what they are doing.”

He said a lot of hard work and planning was involved as well.

Between his deployments to Iraq, Franks was stationed at Fort Huachuca in Arizona. It was here that he and his wife Alicia had their children Aaron and Colby.

In 2007, Franks attended the Air Force Command and Staff College at Maxwell Air Force Base.

He then returned to Fort Bragg, which put his family close to his wife’s parents when he was deployed in 2008.

Each deployment came with its own challenges because of the situation and the country’s terrain.

“It was very intense,” Franks said. “Very long hours, 20 hour days … sometimes longer than that … it was exhausting, but you are in it, and it is rewarding. You put in those hours because, hopefully, you putting in that kind of work will save somebody from getting blown up.”

He said a year in deployment can be like three because the need never ends. Sometimes right as he was getting ready to sleep there would be an explosion somewhere that he would have to figure out what happened.

He said there was a shift in Iraq in 2008 when locals started helping them find who they were looking for.

When he came back from being deployed in Afghanistan, he was assigned to be the Army Special Forces Liaison chief officer for the Special Operations Command South in Florida. The Special Operations Command Pacific in Hawaii had an opening for a chief officer, and Franks said, initially partially as a joke, he would be willing to go. Later, his boss said seriously, if Franks wanted to go, he could probably make it happen. He talked to his wife about it, then Franks told his boss that he did want to take the position.

He said he enjoyed the position, but the pace of the Special Operations Command was a lot different than what he had been used to.

He had been in operations where “if anything happens, I am the first person that gets called — I get called before the brigade commander” to coordinating different elements.

When he retired from the U.S. Army in 2016, Franks returned to Chilton County with his family to be closer to extended family and friends. Franks said the roles for the couple have switched, where Alicia, who has a doctor of pharmacy degree, is now pursuing her career, and he is staying home taking care of the children and helping the community as he sees opportunities.