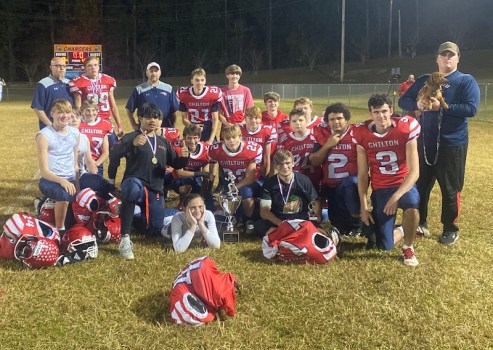 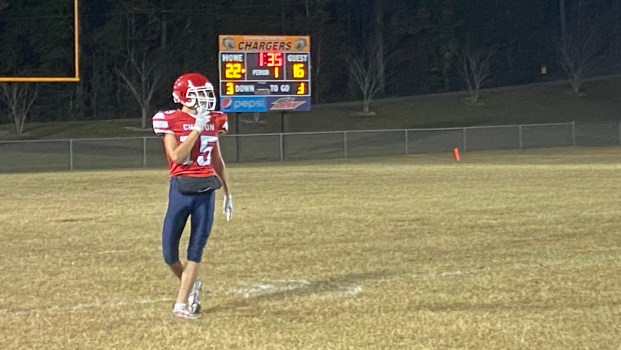 The Patriots were led by the 2022 ACAA Player of the Year Donovin Norcross who posted 172 rushing yards on 14 carries and punched in two touchdowns. He added three catches for 96 yards and two touchdowns, and had 21 tackles and an interception on defense. Donovin Norcross had 380 all-purpose yards adding 112 return yards to his rushing and receiving totals.

Donovin Norcross won the player of the year award following the game. CCA coach Jay Norcross, Donovin’s father, was named the ACAA Coach of the Year after the game as well.

“I have been coaching him for a few years now, and he leads and everyone follows. He made others leaders this year that will follow in his footsteps,” Jay Norcross said. “I am proud of that guy.”

“The other 15 guys are my boys too, and they are my family,” Jay Norcross said. “That is what we talked about every day was for these guys to believe in each other, and have each other’s backs not only on the football field but in life as well.”

Pineview got on the board first on its second play from scrimmage to jump ahead 8-0 just 40 seconds into the game. McCary responded quickly on the ensuing kickoff returning the kick to midfield. A few plays later, Easterling found Donovin Norcross on a long touchdown pass, but the point after was missed and the score stood 8-6.

Norcross made his presence felt on the defensive side of the ball as well, halting the next Pineview drive with an interception. Norcross converted the takeaway into points on offense punching in a short five-yard touchdown run to give the Patriots their first lead in the game, 14-8.

The teams traded touchdowns to finish the first quarter — a short touchdown run by Pineview and Villegas added a touchdown run for the Patriots to put them ahead 22-16 after one frame.

Pineview came out firing on all cylinders in the second quarter posting three touchdowns in the quarter. Easterling found Donovin Norcross for a long touchdown pass in the quarter, but CCA went into halftime trailing 40-28.

Villegas carried the ball three times for 22 yards and two touchdowns, and added three catches for 43 yards and a touchdown. He made 14 tackles on defense and got a sack.

Just before halftime, McCary injured his back and was hindered by the injury the remainder of the game. In the second half, two other Patriots players exited the game with injury while McCary played, but was not 100%. McCary did muster 43 yards on three carries and caught two passes for 94 yards. He added 71 return yards to post 208 all-purpose yards.

“You have got to have speed in this game, and you need some defensive stops, but our first injury hurt us,” Jay Norcross said. “Our other guys stepped up … it was back-and-forth, but then the injuries started piling up.”

Pineview carried over its momentum from the first half getting a quick turnover and connecting on a long touchdown pass to extend its lead to 46-28. Easterling took in a 15-yard touchdown run the ensuing Patriots possession to keep the game close at 46-34.

Easterling was 9-for-12 passing for 217 yards, two touchdowns and one interception. Easterling made nine tackles on defense.

However, Pineview added three more touchdowns the rest of the quarter, and the only other CCA score in the quarter was a Villegas five-yard touchdown run. That put the Patriots down 68-42 with just one quarter left.

Pineview added a late touchdown, and Donovin Norcross found Villegas for a touchdown connection for the last Patriots touchdown of the season.

“I am very proud of these guys … My seniors taught these young guys for years to come, so I could not be any prouder,” Jay Norcross said. “Hands down, I love them, and I would not trade them for anything else.”

Chilton Christian finishes the 2022 season with a 5-2 record.