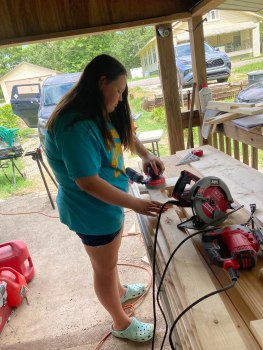 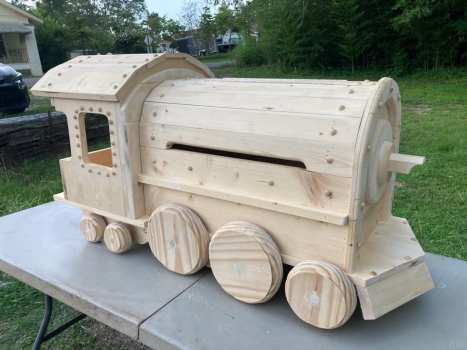 Thorsby resident Whitney Scarbrough has had a lifelong love for carpentry. A logging truck driver by trade, Scarbrough said his carpentry interest began at the age of eight when he and his mother attended Clanton’s Harvest Festival.

“It was held in downtown Clanton and lots of vendors would come,” Scarbrough said. “One of the vendors was an elderly man that sold children’s toyboxes in the shape of trains. My mother bought the toybox for me and in the 30 years I have had it, I have never seen another toybox like it.”

At the age of 14, Scarbrough began helping his father and grandfather with construction work and gained basic knowledge of carpentry. As an adult, Scarbrough decided to recreate his childhood train toybox for other children to enjoy. He makes toyboxes in his spare time when he is not truck-driving and being a full-time father.

“I was fascinated with trains as a child,” Scarbrough said. “I love to see the look on the child’s face when they see the finished product.”

Each toybox takes approximately 24 building hours to complete and are 2×4 feet long. He uses spruce and soft pine.

“My oldest daughter, Brookelynn helps me sand them down,” Scarbrough said. “I don’t make as many toyboxes as I would like to. It is about finding the time. It is fun to see how creative we can get.”

Scarbrough leaves the toyboxes unfinished but will paint or stain them by request. He also makes other woodcrafts, including birdhouses.

Whitney is the proud father of Brookelynn, Ashlynn and Carleigh Scarbrough.