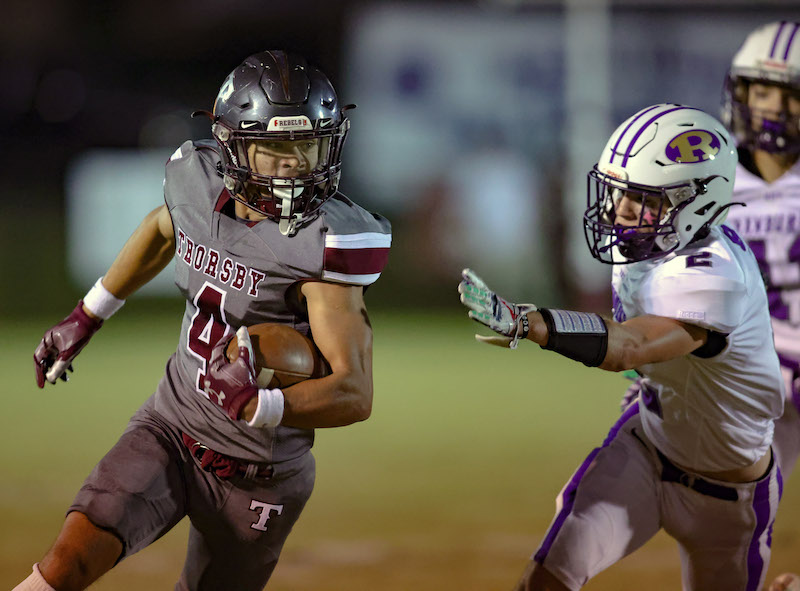 Thorsby High School fell to Reeltown High School 49-8 in the first round on Nov. 4. (FILE | ADVERTISER)

The Thorsby High School Rebels could not contain the AHSAA Class 1A Region 3 champions Reeltown High School and fell 49-8 on Nov. 4 in the first round of the Class 2A state playoffs. While the Rebels had just four seniors on the roster, three of them combined for the score in the game for Thorsby.

In the waning seconds of the game, senior Aaron Arraedondo got on the field and a reverse pass was called by Thorsby coach Daryl Davis to get the ball in his hands. Arraedondo looked down field for a receiver, threw the ball as he was getting tackled and found fellow senior Aiden Turner for the touchdown. Remington Taylor punched in the two-point conversion run to cap the senior trio’s scoring play.

“(Aaron) will never forget that … it was a good moment for him,” Davis said. “The seniors stuck with it, and our young guys looked up to them. It is hard to play with four seniors against teams that have 10-12 seniors. It is a big difference.”

Reeltown jumped on Thorsby quickly going up 14-0 after the first quarter, and 34-0 at halftime. Reeltown added a touchdown in the third quarter to hold a 42-0 lead after three periods.

“It is a tall task when you draw someone who is top-five in the state, but we felt like we had a good plan,” Davis said. “They play hard and they have a big team, and not only are they big, they are fast too.”

Thorsby was inside the Reeltown red zone on three separate occasions, but could not convert those trips into points.

“I thought our kids came out in the second half and played hard, and if we would have done that in the first half you are looking at a lot closer of a game,” Davis said. “We have a young team, and I told them I hope they learned something from this to help them going forward, and I think they did. We will be better from it.”