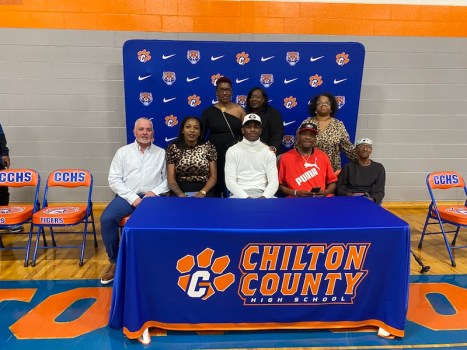 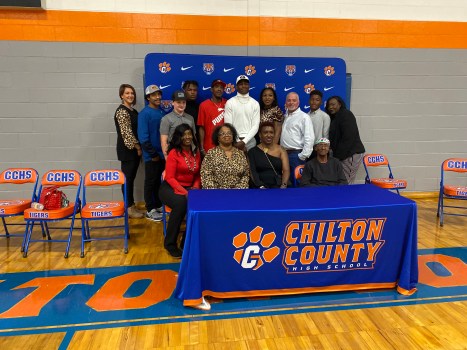 Junior football standout Demarcus Riddick of Chilton County High School announced his verbal commitment to The University of Georgia on Nov. 4 alongside family and friends. Riddick is ranked as the 43rd overall prospect in the nation in the class of 2024 by ESPN, and is the second-ranked linebacker recruit in the class. He is ranked third in the Alabama state rankings by ESPN for 2024 and is a four-star recruit.

“I can bring the best player I can be (to Georgia), and work my butt off and give a 100% every single day,” Riddick said. “I want to just give them all of me.”

Chilton County coach Marvin Morton, who has seen Riddick play in Clanton since his middle school years, hopes this commitment will bolster his confidence as well as the CCHS program’s.

“It is a very exciting time not only for Demarcus but for this football program,” Morton said. “Demarcus being able to announce after his junior season is remarkable. Hopefully this will inspire and motivate his teammates with him verbally committing today.”

Riddick has been a multi-year starter for the Tigers, and Morton has seen his progression throughout high school.

“He has been in the weight room and he is a lot stronger now than he was last year,” Morton said. “Working on his explosiveness and conditioning, and continuing to improve that so next year he is ready to sign his letter of intent.”

Morton said he and Riddick had many talks about his future throughout the last few seasons. Morton said he wanted Riddick to choose the best school for him and “feels very confident in the decision he made today.”

“I am very proud of him,” Morton said. “I am going to tell him that the work does not stop now, and if anything, he needs to continue to work harder and push harder. Use this as motivation to be the very best that you can be.”

Riddick has one year left at CCHS, and he hopes to continue to build the Tigers program that has seen an improvement in wins each of the last two seasons.

“Coming up this next season and the offseason I am just going to stay focused and work hard until I am in college, and keep doing what I am doing,” Riddick said.