Maplesville advances with rout of Hatch 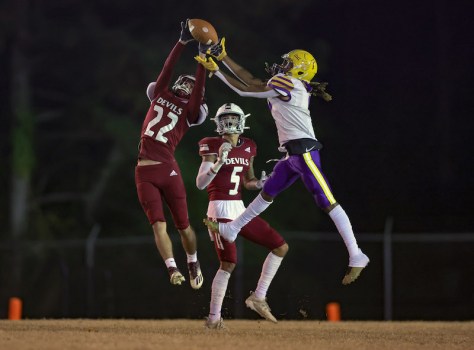 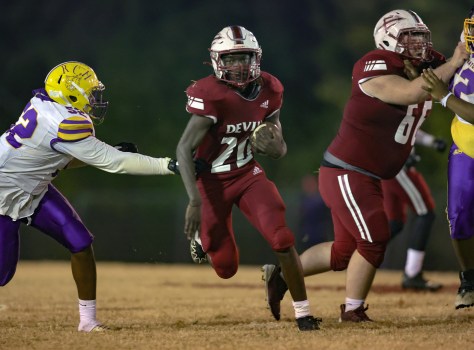 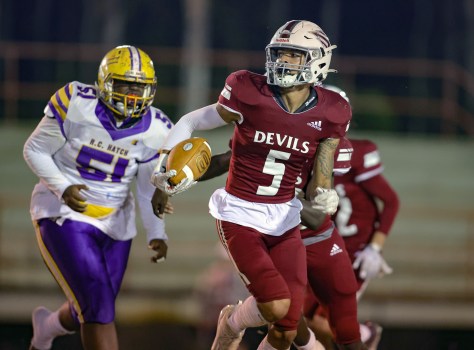 Maplesville High School made it 14-straight years with an AHSAA state playoff first-round win thumping Robert C. Hatch High School 55-8 on Nov. 4. Jakavion Jackson carried the load for the Red Devils running for five touchdowns, and four of those in the first half. Jackson ran for 153 yards on 10 carries.

Maplesville coach Brad Abbott said numerous players were out throughout the week leading up to the game.

“This group had a great week of preparation, and they came in ready to go Monday,” Abbott said. “We had different people in and out, and we never really had a full squad for practice this week, but some of the young kids stepped up for us.”

Maplesville, the top seed from Class 1A, Region 4, got things started quickly with Jackson running for a 38-yard touchdown just 45 seconds into the game. Johnathon Wilson added the two-point conversion run to put Maplesville on top 8-0.

Payton Cook picked off a pass on R.C. Hatch’s first possession near midfield and returned it inside the Bobcats 20-yard line. That setup Jackson to punch in an eight-yard touchdown run to push the advantage to 15-0.

Jackson continued his impressive first quarter adding an interception and his third touchdown run. Maplesville quarterback Troy McMillian found Evan Harrison for a touchdown connection that gave the Red Devils a 28-0 lead after the opening frame. McMillian went 7-for-12 passing and threw for 133 yards.

Jackson had been hampered with an ankle injury the second half of the season.

“You can tell, his ankle is pretty much back to normal now,” Abbott said. “That is definitely a positive, and we will have Coleman (Gill) back next week, and that just throws another one in the backfield.”

Maplesville stretched its lead in the second quarter behind a three-yard touchdown run by Wilson, and Jackson punched in his fourth rushing touchdown of the first half. Wilson caught two passes for 63 yards.

The fourth seed from Class 1A, Region 3 R.C. Hatch got into the end zone with a touchdown pass, but trailed at the halftime break 42-8.

“Tonight, we all came together,” Abbott said. “Those kids that got reps this week did a great job, and it was overall a great team win, definitely.”

Jackson took his fifth rushing touchdown in the game 46 yards to open the scoring in the second half, and stretch the lead to 49-8. Jay LaGrone put the finishing touches on the Red Devils win with a 24-yard touchdown scamper.

Maplesville will take on Leroy High School on Nov. 11 in the second round of the AHSAA Class 1A state playoffs.

“You have two great programs, a lot of history at both schools and a lot of pride in both schools,” Abbott said. “It should be a great night here. Looking forward to an exciting football game.”