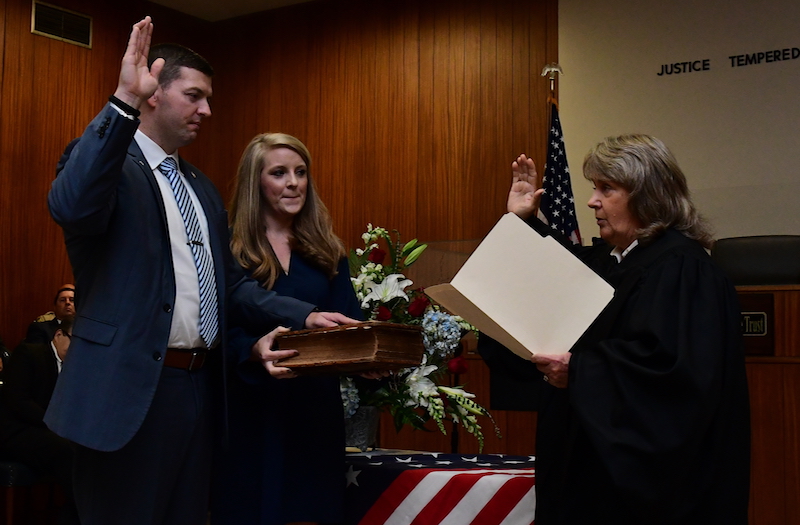 Robinson was appointed to the position in September when Randall Houston retired. Robinson had already won the Republican primary for the position and is running unopposed in the Nov. 8 general election. He has been the Chief Deputy District Attorney for the past 10 years.

As district attorneys, “We have the opportunity to look that victim in the eye and tell them I am for you … but that can’t be an empty promise. At the end of the day, we have to stand and deliver,” Robinson said during the investiture ceremony. “… We measure our success by how many times we look evil in the eye and say without question, ‘under the law, you will pay for what you have done.’ … This is my pledge to the people of the 19th Circuit, I’ll stand for you, I will speak for you. The path will not be easy, but we will fight. We will stay the course, and we will keep the faith. And by doing that, we will seek the truth, and we will pursue justice.

His definition for truth is that there is absolute truth, and something cannot be true for one person and not another.

“Truth plays no favorites,” Robinson said. “Truth must be objective. This means that the same truth is applicable for everyone … I believe we all have a responsibility to defend the truth, to seek the truth. At the end of the day, truth will prevail.”

He recalled how as a law student he was challenge to always “pursue justice while never exceeding the boundaries of the law” by holding to the truth and speaking it.

Robinson thanked everyone for their encouragement as he enters this new role. He thanked his wife Malia Robinson and his family for their support as well as to thank all of those who have helped him get to this point in his career.

“(The District Attorney is) judge between the people and the government. He is to be the safeguard of one and the advocate for the rights of the other. He ought not to suffer the innocent to be oppressed or harassed he is to pursue guilt. He is to protect the innocent. He is to be the judge of circumstances and accordingly to their true complexion,” Barry Matson, executive director of the Alabama District Attorney’s Association, said. “… C.J.’s client is the truth. His client is justice. His client is the public welfare. To understand that is to support what he does.”

Matson said the public sees the convictions of criminals and the highlights of a DA’s career, but they do not see “all the work and hours that goes into being a district attorney,” including being on call 24/7.

As a prosecutor, the DA’s job is not to make law enforcement or victims happy, neither is it to always answer a public demand for a certain decision if the evidence is not there to support it, Matson said.

Colleagues and mentors gave encouragement prior to Robinson taking the oath of office.

Chilton County Sheriff John Shearon recounted memories of meeting and working with Robinson as his career was just getting started. He spoke of Robinson’s determination, dedication and hard work.

Shearon and Ben Fuller, 19th Judicial Circuit Judge (Place 2), both told Robinson how proud they were of him.

“The one thing that is always first and foremost paramount in C.J Robinson’s mind is … what does the law require, and what is good for our citizens and the protection of victims’ rights,” Fuller said.

Fuller and Mandy Johnson, District Attorney Chief of Staff and senior assistant district attorney shared memories of working with Robinson, his dedication and what he has meant to them as they worked together. Johnson said Robinson is extremely organized and has helped her become a better attorney. She also spoke of Robinson’s ability to stay peaceful while fighting for the truth and justice.

Robinson’s pastor, the Rev. Matt Debord, encouraged Robinson to “trust in the Lord … turning neither to the left or to the right, and he will direct your paths.”