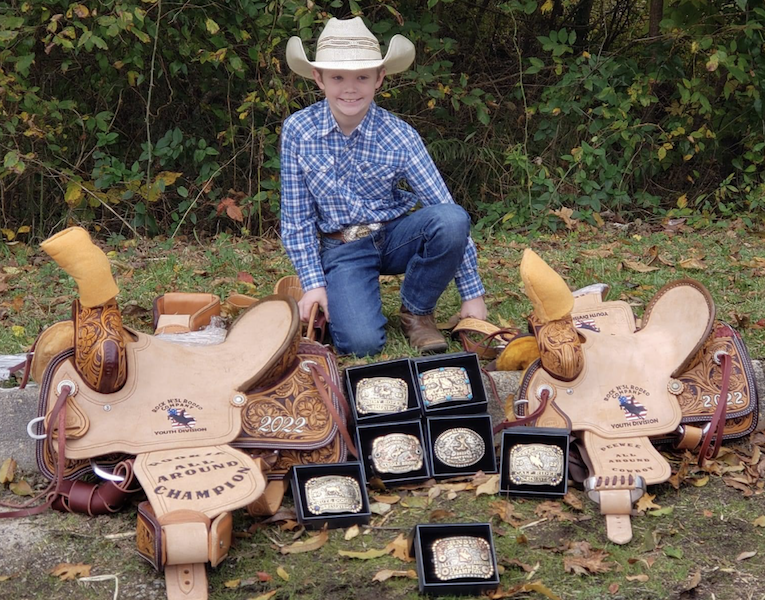 Paul Nelson is making a name for himself in regional youth rodeo. (MARC MCMINN|CONTRIBUTED)

Paul Nelson has come a long way from falling off a sheep during a mutton busting event at a rodeo five years ago.

Reserve all around means Paul is second for the most points for the season for his age division for male riders.

Paul recently competed in the International Miniature Rodeo Association event in Illinois for the first time. He then finished his season with the Rock N’5L Rodeo Buckle Series.

Paul will move up to a new age group next season.

During the competitions, Paul enjoys “good people (and) good friends.”

Paul decided he wanted to try rodeo after seeing bull riding while watching “Walker, Texas Ranger” with his father, Lance.

“My husband said, ‘pay $5, he is going to get on the sheep, he will get in the dirt and not want to do it again,’” Tiffiany said.

Instead, falling fueled his enthusiasm.

“… and we haven’t been able to stop him since,” Tiffiany said.

Paul competes two to three times a month during the rodeo season.

Lance Nelson has created practice areas for Paul to prepare for rodeos, including a rig that simulates the bucking of a calf during the calf riding competition.

Paul has two horses, June and Buttercup, but in competition, the animals he rides are chosen by the rodeo at random. Paul said this is a challenging part of the competition because he does not know what the animal is going to do.

Paul has won a total of 20 belt buckles in his five-year career. This year, he also won more than $1,000 through his rodeo competitions. These funds have been used to pay for caring for his horses, dogs and chickens. Selling eggs from his chickens pays for his rodeo fees.