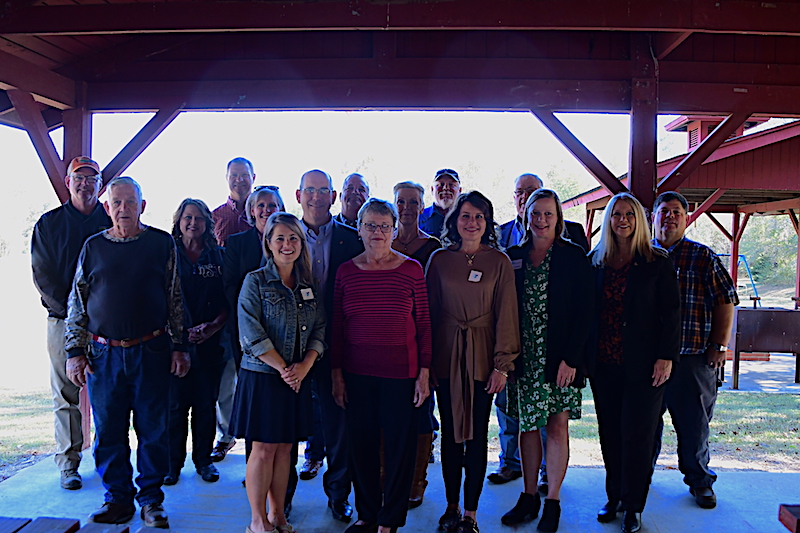 The Cawaco Resource Conservation & Development Council celebrated $83,967 in completed grant projects with an event on Oct. 27.

“Chilton County did very well,” Drayton Cosby of The Cosby Company, which works closely with Cawaco on the grant program, said.

The event served as a time for those who had received the funds to talk about the projects and thank state legislators that represent Chilton County for their continued support.

“We are able to do more (funding) because you all have allowed us to do more,” Cosby said of the legislators.

Patti Pennington of Cawaco and the legislators present thanked all of those who had received grants for what they are doing in their communities.

In total, eight reimbursement grants had been awarded.

Two of the projects were in Maplesville, so that is where the celebration event was held.

The town of Maplesville received $7,500 toward a storm shelter. Town Clerk Dawn Smitherman said American Rescue Plan Act funding was also used on the project. She said the final pieces of the project are being worked on to run electrical to the site and add a septic tank. Total cost of the project is estimated at $115,000

The storm shelter will also be equipped with a generator set to come on automatically, if the storm knocks out the electricity.

Maplesville High School received a $1,997 grant for raised beds for the FFA. FFA teacher Joe Dennis said the program has been going for several years, and the grant helped keep the program going.

“I kept up with it about three years ago, we raised 2,200 pounds of produce and gave away that year,” Dennis said. “I don’t weigh it every year, but we usually have got something in that bed growing that we can giveaway year-round. It has been really successful.”

Produce is given to members of the community as well as the students who work in the program.

“They are really proud when they planted it and they watered it and fertilized it and weeded it, and they get to pick it and wash and put it in a bag and take it home.”

The Maplesville FFA has also built raised beds for community members to grow produce on their own.

Butterfly Bridge Children’s Advocacy Center, which works with children who have been abused as their case goes through the court system and through the healing process, received $5,000 toward renovations of the location it moved into last year.

“We had outgrown the facility that we had been in for 10 years,” Jana Zuelzke said.

The larger facility allows the organization to offer more than one service at a time, while maintaining confidentiality. Zuelzke welcomed those present to come take a tour of the building.

“The kids love it when they come in,” she said of the new building.

The YMCA of Chilton County used its $15,000 grant to add an irrigation system for the soccer field.

Lori Patterson, CEO and director, said the field is also being over seeded, “so, we will have a turf like field.”

“This enabled us to go from 50-60 kids in the program when it first began to this year when we plan to serve around 500 kids,” Patterson said.

The upgrades have also allowed the Y to host multi-county competitions.

The Chilton County Commission received $30,000 to sandblast, paint and repair several storm shelters throughout the county.

“We are so thankful and appreciative,” Silvia Singleton, county administrator, said.

Chestnut Creek Heritage Chapel received $9,500 to preserve the steeple on the historic chapel.

“If it would have collapsed, we would have lost everything,” Ola Taylor of Chestnut Creek Heritage Chapel said.

Cawaco has been supportive of restoration and preservation efforts at the chapel since 2015.

“Their good support has helped us to save a 100-year-old building that was a church and use it for the whole community,” Taylor said.