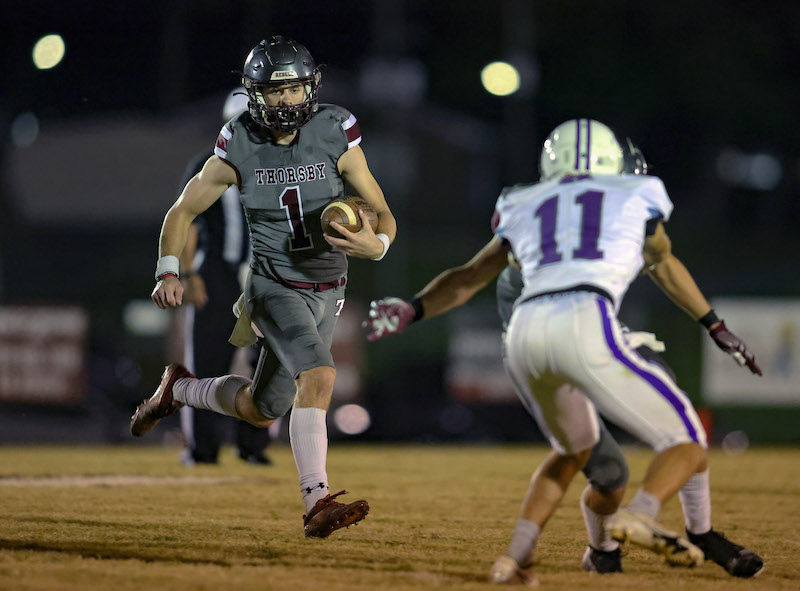 Thorsby High School righted its ship on Oct. 28 with a 42-22 win over Billingsley High School after a loss the week before. Thorsby’s Remington Taylor and Grayson McManus each contributed three touchdowns that helped the Rebels jump out to a 36-0 lead in the game.

Then, the two connected on the fourth Thorsby touchdown of the first half. McManus found Taylor for a 24-yard touchdown pass, and Nate Thomas converted his second two-point conversion run to stretch the advantage to 28-0 at the intermission. Thomas caught four passes for 62 yards. McManus was 7-for-14 passing for 110 yards, and added 82 rushing yards to his totals.

Billingsley had a chance to end two Thorsby drives in the first half with interceptions that were dropped, and the Rebels subsequently scored touchdowns later on both drives. The Bears were fighting the flu, and were missing three starting offensive linemen.

“Even as young as we were already, those three being out, and we were piecing it together, and for that to happen, and we were still able to move the ball all night long. We just did not convert on a few fourth downs,” Billingsley coach Lanny Jones said. “We did not have anything to lose, and we were trying to keep the momentum in the game.”

McManus rushed for a six-yard touchdown and the two-point conversion out of halftime, and Thorsby enjoyed a 36-point cushion after three quarters.

Billingsley got its offense going in the fourth quarter when quarterback Landon Jones found Z’Londre Tyus for a 21-yard touchdown. Jones was 10-for-13 for 139 yards, and added 59 yards rushing on 12 carries. Tyus caught five passes for 80 yards.

“I feel like this team this year began setting the standard, the foundation and expectations of what we want, and we saw bits and pieces of that,” Jones said. “The guys who stuck it out just shows that if we do everything we need to do, there is some positive impacts for our program in the future.”

Kaden Cotton got the Billingsley defense involved returning a fumble recovery 47 yards for a touchdown. Cotton had seven tackles on defense. Randriquis McCary led the Bears defense with 12 tackles, and Nathan Gilmore had 11.

McCary put the last Billingsley touchdown on the board in the fourth quarter with an eight-yard run.

Brayden Littleton had a three-yard touchdown run for Thorsby late in the game. Johnavin Brandenberg led the Rebels defense with 13 tackles, and Malachi Allgood had 11 tackles.